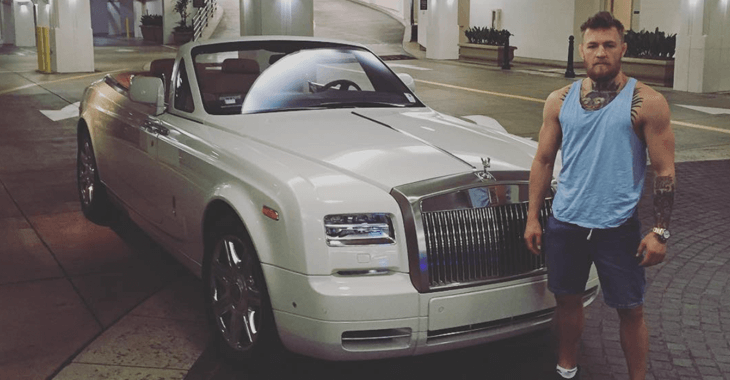 Many of the UFC lightweight fighters were not as welcoming on the idea of Conor McGregor going up a weight class and fighting at 155lbs. Both Rafael dos Anjos and Donald “Cowboy” Cerrone said that it was a bad idea for McGregor to move up.

UFC welterweight Stephen “Wonderboy” Thompson on the other hand thinks that going a step further and joining the guys at 170lbs would be a great move for the UFC featherweight champion. Thompson spoke with Submission Radio recently and had nothing but praise for the vocal Irishman (transcribed by Bloody Elbow):

“[McGregor] walks around about 180 pounds and he looks massive,” Thompson told Submission Radio. “Of course there’s a lot of shorter guys in the 170 division, you know, Johny Hendricks being one of them – he’s like 5’9” and he’s crushing it – and I think he would do well. I mean, his striking’s great. I think he would have to put on some muscle just because the guys in the division are just so much bigger. You know, they’re walking around at 195 (pounds) some of them 200 (pounds). And if you’re at 180 (pounds), yeah you’ll get down to the weight pretty easy, but man, I mean the guys in this division – look at Robbie Lawler. Look how massive that guy is, and he’s got great striking as well.

“So I mean, I think he’d do fairly well. That would be very interesting just to see. I think that’s what he’s looking for; everyone wants to see how he’s going to stack up to these, you know, the 155 and the 170 [fighters]. So that’s going to sell tickets.”

When asked about how he thinks he would fare in a match with McGregor, Thompson shared his thoughts.

“Yeah man, we have fairly similar styles with our stances, putting our hands and kicks together. He likes to throw side kicks, I like to throw sidekicks, hook kicks, you know, things that you don’t normally see in a sparring session. People aren’t used to seeing that and that’s why we catch guys with it. I think it’d be a very exciting fight to be honest with you, and it would definitely be a striking war, but I just feel like I’m more experienced when it comes to that style. I think that I have more tools. You know, he likes to keep his right side forward, I work both sides.

“I think I have more weapons in my arsenal than he does. So that said, I think I would come out with the win, but it would be really cool to go out there and fight the best guys, man, and he’s definitely one of them. He’s shaking it up. He’s literally the Muhammad Ali of MMA right now.”

How do you think Conor McGregor would stack up against the roster of UFC welterweights? Share your opinion with us in the comments!