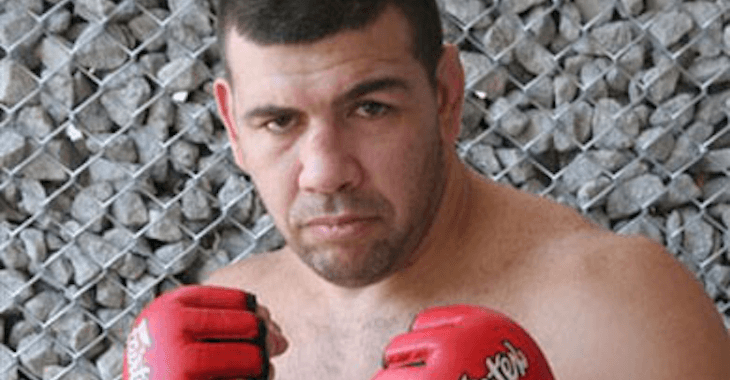 Long before the likes of Cain Velasquez, Fabricio Werdum, Fedor Emelianenko, and Brock Lesnar dominated the heavyweight division, Pedro Rizzo was one of the biggest powerhouses in the octagon. The near twenty-year veteran will be hanging his gloves up after securing another technical knockout victory at “Face to Face 12: Rizzo vs. Flores” in Brazil on September 12.

Rizzo retires with a record of twenty wins and eleven losses.

“The Rock” made a name for himself in the mid-90s by dominated the World Vale Tudo Championship scene in Brazil. It wasn’t until his UFC debut at “UFC Brazil” where he truly became one of the biggest heavyweight stars in mixed martial arts. Rizzo had little fanfare behind him when he walked into the octagon, but his knockout win over “Tank” Abbot increased his stock tenfold within the company.

“I don’t need to fight anymore, but I wanted to fight one more time for my students and my daughter, who is eight years old and wanted to see me fight,” Rizzo stated. “Now is time for the new athletes and talents to shine. It all ended how it started, with low kicks in Brazil.”

Where do you think Rizzo ranks in the all-time greats of the UFC? Should he earn a Hall of Fame bid for his exciting fights with Randy Couture? Share your thoughts in the comment section below!