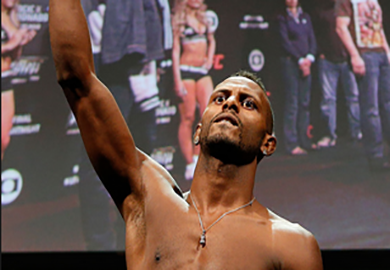 Souza experienced a huge reach advantage and he utilized it well in the opening minutes of the first round. Once he started landing his right hand more often, though, he went inside the distance which allowed Eddiva to land some strong shots of his own. What started out as a technical counter-punching fight quickly turned into a “Let’s see who falls down first” brawl and the crowd loved it!

The bout returned to its technical form in round two, but Souza slowly turned up the pace of his offense and realized that Eddiva was backing off and cornering himself. Souza took advantage of this realization and started picking Eddiva apart with overhand rights and straight lefts. Eddiva put his hands up so Souza changed levels and started to attack the body. Eventually, it got to the point where Souza was landing shot after shot and Eddiva was not fighting back. Herb Dean stepped in and stopped the punishment.