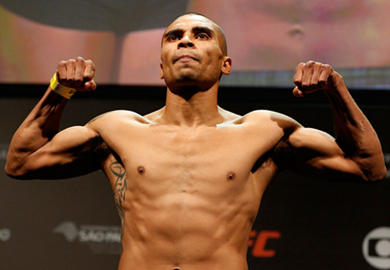 Rony Jason and Robbie Peralta kicked off the main card portion of ‘UFC: TUF Brazil 3 Finale’ with a featherweight contest. Jason and Peralta did a great job in throwing caution to the wind which the crowd was very receptive of.

Neither man was looking to take the fight to the ground and the only time grappling took place was to engage in the clinch. Every now and then Jason would look for a trip but it would only lead to a scramble where Peralta would get back to his feet. The beginning of rounds one and two were strategic and eventually all formality was thrown out the window and it turned into a brawl.

Both Jason and Peralta fought safe in the last round, trying to lock up the win with a takedown. Jason picked apart Peralta with shots and took him down with only a minute left in the round. Peralta got right back up to his feet and executed a takedown of his own. It was a fight where nobody got a real advantage and each man landed flurries of good shots.

When the decision was read, there was a great amount of confusion floating in the arena. One judge gave two rounds to Peralta, another judge gave all three rounds to Jason while the last gave all three rounds to Peralta. The fight could have gone either way and it is believed that Jason should have won the fight. However, there should be some concern within the UFC that all the judges saw three different versions of one fight.