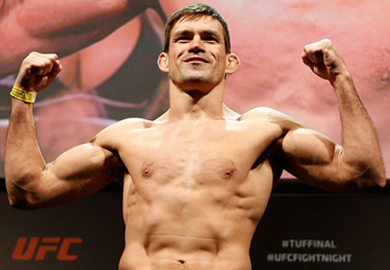 Demian Maia was the aggressor in the first round as he controlled the center of the octagon. Yakovlev allowed him to dictate where the fight went, playing the role of counter-striker. It did not work out too well for him early on as he ate a huge left from Maia and gave up full mount immediately. Maia rode him for the remainder of the round and picked his shots, making sure to not work for anything to tire himself out.

It was not long before Maia took Yakovlev down again where he killed three minutes with top control, but Yakovlev turned the tables and swept Maia so he was on top. The round ended with Yakovlev in Maia’s guard, seemingly waiting for the round to end. This is right around when the crowd started voicing their disapproval with a loud chorus of boos.

Demian Maia’s gas tank was nearly empty walking into the third round and Alexander Yakovlev’s seemed to be just fine. Yakovlev kept the easily took Maia down in the opening minute of the third but let Maia right back up. He proceeded to pick him apart with leg kicks and even landed a brutal uppercut, but Maia survived and eventually landed the takedown he needed. He transitioned right into mount, and once again seemed content with just picking his shots.

Not once throughout the entire fight did Maia try to go for a submission while in full mount. Yakovlev finally shrimped out of the bottom of full mount to get back to his feet with twelve seconds left. Unfortunately for him, it was too little too late and Maia already had the fight won on points.