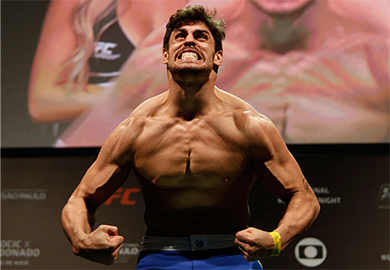 Antonio Carlos Junior kept a high pace going in the first round that caused ‘Team Sonnen’ fighter Vitor Miranda to circle around and be overly-defensive. Even though Junior did not land anything big, he peppered Miranda enough to win the round in the eyes of the judges.

Vitor Miranda may not have racked up much impressive offense, but that’s not to say he did not fight intelligently. After Junior landed some takedowns, it seemed like he was only one step away from locking in a couple fight-ending submissions. Miranda defended brilliantly and escaped them with ease, getting back to his feet shortly thereafter. Unfortunately for him, that is where his brilliancy ended.

Miranda did a great job in landing leg kicks, but those kicks allowed Junior to get easy takedowns. Whether or not Miranda escaped submissions was pointless if he was not doing anything to make up for it.

The following series of events sums up the fight perfectly: After getting taken down, Miranda tried to get up and escape Junior’s clinch. Miranda thought he had a judo-throw attempt and went for it, but Junior just let go of the clinch to defend. The result was Miranda falling directly on his head and Junior following him to the ground.

It was always one step forward, two steps back for Vitor Miranda.