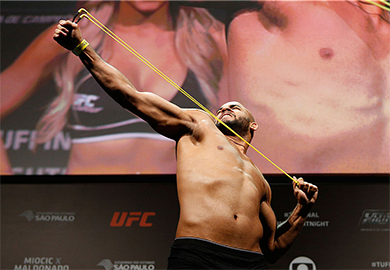 Most fighters in the finals of ‘The Ultimate Fighter’ tournament fight safe and hope they earn a judges’ decision to get into the promotion. Warlley Alves was going for broke the entire fight and it finally paid off in the third round when he picked up the win by submission.

Alves acted as the aggressor throughout the fight while Alexandre constantly backpedaled. It was a high paced fight for Alves and he kept the same pace, swinging for the fences throughout the entire fight.

There was a moment in the first round where Alves clipped Alexandre with a shot that dropped him. Alves jumped on him and tried to finish the fight, but he found no success in it and Alexandre made it back to his feet a minute later. From that point on, though, Alexandre fought even more careful than before and simply got dominated.

Alexandre was desperate for something to go his way so he tried to take Alves down with a single leg. Alves saw that his neck was not tucked in and tried to trap him in a guillotine choke. By the time Alves’ back was on the ground, the hold was fully locked in and it was only the question of whether Alexandre would pass out or tap out. He went limp and the referee waved off the fight, making Warlley Alves an official UFC fighter.

Warlley Alves def. Marcio Alexandre by way of Submission (Guillotine) :25 of Round 3