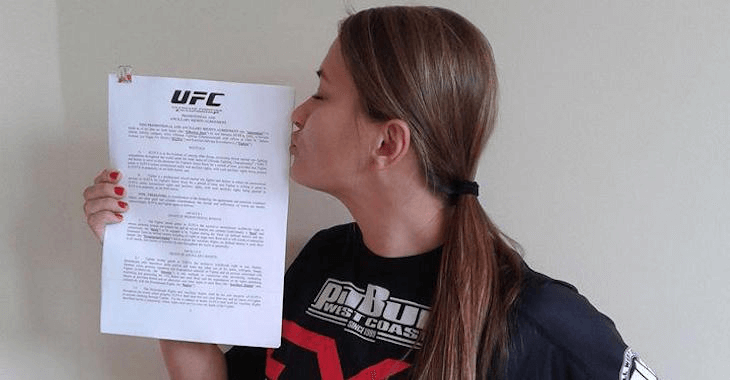 Ultimate Fighting Championship is lucky they have a fighting champion in Joanna Jedrzejczyk because her division is starting to look stacked! Claudia Gadelha is knocking on the door of a title opportunity after “Joanna Champion” defends against Valerie Letourneau.

Paige VanZant, Michelle Waterson, Jessica Penne and Joanne Calderwood are all knocking on the door of contendership, but this undefeated KSW signee may put a stop to those ladies’ momentum.

Karolina Kowalkiewicz may be a familiar name for those who follow Invicta FC, but she is mostly known for her time spent with KSW as their dominant women’s strawweight champion. While it’s almost certain Kowalkiewicz will have to scrap it out with one or two lades before she challenges whoever the UFC Women’s Strawweight Champion is at the time, one thing is for sure: She is a viable opponent who has a balanced and exciting fight style.

Kowalkiewicz is 7-0 and has three finishes to her name. Who do you think she should face in her octagon debut? Share your thoughts in the comment section below!