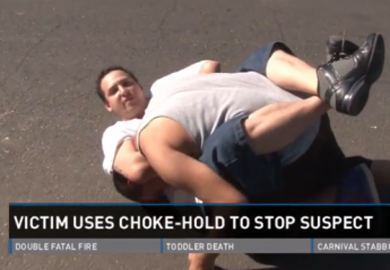 “I just snatched his legs and took him down. I had just put him in an armbar, he slipped right out of it. So then I got him in a rear naked choke and started rolling and squirming around. He got out of that as well. I had him in a guillotine choke. And he wasn’t getting out of that. I had that lock really tight. I just held him in place and said, ‘Well, guess you are going to jail tonight buddy.'”