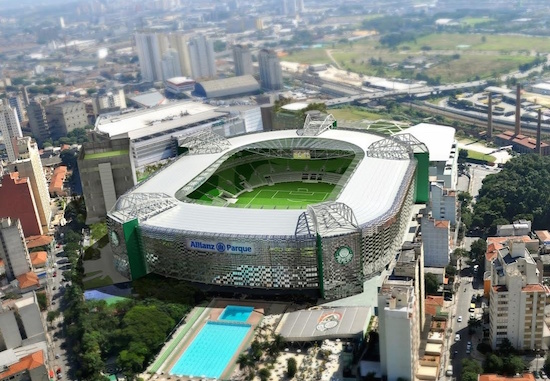 “Curitiba is in our list. We have booked dates there and in Palmeiras’ arena (in Sao Paulo, pictured), we’re now studying the number of tickets that we can sell. If it’s going to be a big or a small show. We like the size of the arena in Curitiba. I think it holds 40 000 places besides the seats on the floor. There is a good chance in Curitiba. We are watching very closely.”

“It all depends on the timing and the fight. We need a big fight to use a big stadium. If we have the right fighters aligned with the dates booked – which is often a challenge – we’re making a fight in a stadium in 2015. That is our goal. About the weather, there is no need to worry. Both of the arenas have retractable roofs. They could close immediately, if necessary.”

In a recent interview with the Brazilian Media, UFC executive Marshall Zelaznik outlined the optimistic plans for next year.

Which fights would be worth of such an arena? Aldo vs. McGregor? Silva vs. Weidman III?