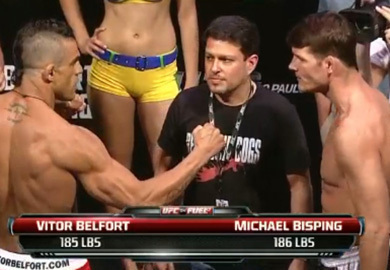 Tonight the UFC returned to Brazil in a big way with the UFC on FX 7 event headlined by a middleweight clash between Vitor Belfort and Michael Bisping.

The main card featured four-competitive bouts that saw all but one reach an end by way of decision.

In the main event, Vitor Belfort came out slow and methodical but ended up putting the British Bad Boy away before the end of the second frame of action.

Your full results are as follows: