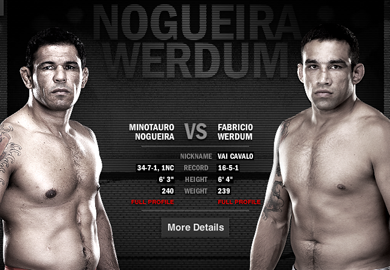 Tonight on FUEL TV, UFC on FUEL TV 10: Nogueira vs. Werdum goes down to finalize the latest installment of ‘TUF Brazil 2’ and not only crown a new international TUF champion, but also settle the coaches fight in the main event of the evening.

UFC on FUEL TV 10 goes down from the Paulo Sarasate Arena in Fortaleza, Ceara, Brazil. The main card kicks off at 5:00PM PT and if you cannot make the FUEL TV broadcast tune in below for all the blow-by-blow and round-by-round action.

Round 1 – Nogueira eats a couple leg kicks only seconds into the fight. Werdum takes Nogueira down and is all over him, transitioning at will. Interesting tactic. Werdum is in half guard and, while trying to advance, connects with some solid punches and hammerfists. Nogueira has a grab of Werdum’s leg, they scramble and they’re back to their feet. It looks as if Werdum is a bit gassed. Nogueira presses Werdum against the cage. They separate and are back in the middle of the cage. Werdum isn’t protecting his face very well and Nogueira is connecting with a few straights. Werdum is pressed against the fence again, and it seems that Nogueira is trying to take advantage of the fact that his opponent is gassed. Werdum spins around and tries to land a single leg, but fails. They’re squaring off again and Nogueira lands an elbow on the inside. Werdum looks at the clock. Seconds before the horn, Werdum lands a weak punch. Close round because Werdum was so offensive, but it never lead to anything. 10-9 Nogueira.

Round 2 – Werdum is trying to keep his distance with long jabs and leg kicks. Nogueira eats a right hand, but isn’t really phased as he keeps pressing the action. Nogueira has Werdum pressed against the fence again. Nogueira attempted to lock in a guillotine, but failed and Werdum is now on top. After a couple scrambles, Werdum sets up an armbar on Nogueira and the referee stops the fight. It isn’t clear if it was a verbal submission or referee stoppage, but one thing is for sure: It’s over.

Fabricio Werdum defeated Antonio Rodrigo Nogueira by way of submission (armbar) in Round 2.

Round 1 – Santos lands the first significant strike of the fight with a solid jab. They get tied up for quite some time before separating. Santos lands a big right hook, and Patolino counters with a jab of his own. Santos gets taken down and Patolino is in his closed guard. Patolino advances to half guard and after a scramble, he’s postured over Santos. They’re back on their feet but Patolino presses Santos against the cage; he is consistently pressuring Santos. They separate and are in the middle of the octagon. They are entangled again on the ground, but the horn sounds before any fighter gets a step ahead of the other. 10-9 Patolino.

Round 2 – Santos throws a high kick that goes over Patolino’s head. They’re trading blows after a failed takedown from Santos. Patolino stuffs another takedown. Santos lands a solid knee, however it looks like they are both gassing. Patolino lands a takedown of his own and is looking to simply regain energy while in this position. They’re back standing and Patolino throws a hook from Grandma’s house. Santos, of course, sees it coming and countered with a knee to the body. Patolino grabbed the fence defending and is warned that if he does it again, they’ll take away a point. Not long after, Santos lands a takedown and swiftly transitions from side mount to full mount. Less than a minute to go, he has to work. Patolino tries to roll out of the full mount, rolls back and Santos catches his arm and locks in a head/arm triangle. Patolino taps out with 20 seconds left and the fight is over.

Leonardo Santos defeated William Macario by way of submission (head/arm triangle) 4:43 into Round 2.

Round 1 – Cavalcante throws a head kick but it’s blocked. Silva blocks a high-knee. Cavalcante takes a straight to the body. We are close to two minutes into the round, and nothing significant has been connected. Another body punch form Cavalcante. Silva connects with a big right overhand punch which sends Cavalcante backpedaling to safety. Silva just misses with a right cross. Silva keeps trying to connect with a body kick but Cavalcante is doing a good job blocking it. Cavalcante nails a spinning back elbow which sends Silva back a bit, but he throws bombs as a way of self defense. Unorthodox, but it worked. After a lull in action, Silva connects with some leg kicks and follows up with a series of hooks that started off with a vicious left hook. An uppercut drops Cavalcante and he is down and out, referee pulls Silva off of his opponent and the fight is over.

Thiago Silva defeated Rafael Cavalcante by way of knockout (punches) 4:29 into Round 1.

Erick Silva defeated Jason High by way of submission (triangle armbar) 1:20 into Round 1.

Round 1 – Mendez opens up the fight with an inside leg kick. Sarafian hits a nice combination that shook Mendez’s head. Mendez goes for a clinch and presses Sarafian against the cage. Sarafian ties up Mendez’s leg and takes him down. Mendez has Sarafian’s head tied up so he isn’t advancing anywhere, anytime soon. Mendez’s arm isn’t around Sarafian’s neck anymore and Sarafian has a chance to lock in a head/arm triangle. He gets full mount and it’s only a matter of time before Mendez submits. It looks like he’s fading, but he was able to squeeze in two taps and the fight is over. Sarafian wins.

Daniel Sarafian defeated Eddie Mendez by way of submission (head/arm triangle) 2:20 into Round 1.

Round 1 – Long feeling out process. Wilkinson ducks a punch and nails a takedown. Wilkinson tries to posture up and Jason gets him in position of a triangle. Jason is throwing elbows, Wilkinson is out cold and the referee stops it!