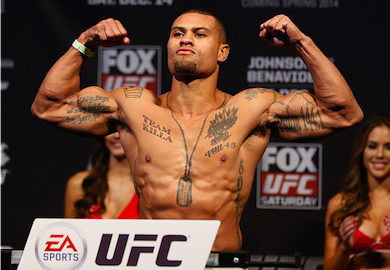 Abel Trujillo’s striking was dynamic as ever and Roger Bowling was too durable for his own good.

Bowling started the bout impressively and was defending Trujillo’s offense well. Trujillo would sneak some strikes in and go for a takedown, but Bowling sprawled and almost set up a submission attempt for himself. Unfortunately, that’s where the good news ended for Bowling.

The last three minutes of the first round saw Abel Trujillo absolutely dominating landing anything from devastating knees to the body, to hard landing leg kicks. Bowling was able to take every single shot and keep pressing forward which was impressive, but it put him in serious danger multiple times. Bowling walked back to his stool at the end of the first round sporting a cut under his right eye.

While working the body, Trujillo was able to take Bowling down early on in the second round. Bowling tried to go for a guillotine choke, but he was never in a position to do so with Trujillo in his open guard. In the meantime, Trujillo continued to push Bowling over toward the cage to corner him and started teeing off with shot after shot. Bowling got rocked right a right hand as his head bounced off the canvas. Trujillo landed with a flurry of strikes, including a legal version of the knee that connected the last time they fought. The referee stopped the fight after Bowling took too many shots.

Abel Trujillo defeated Roger Bowling by TKO (Punches) 1:35 of Round 2