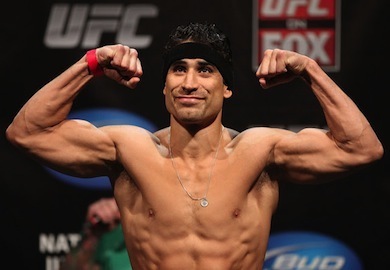 UFC on FOX 8 has already seen its fair share of injuries. Unfortunately, the injury bug plans on infesting it as two more fights have been altered on the card.

Both Edwards and Cruickshank are coming off decision losses to Isaac Vallie-Flagg and John Makdessi, respectively, and will be looking to bounce back and restart their climb up the lightweight ladder. Their bout will take place on the FX broadcast of the UFC on FOX 8 card.

The other injury fell upon Bobby Green (20-5). The recent Strikeforce import impressed early in his career, fighting through a vintage Jacob Volkmann matchup only to submit him in the third round of their UFC 156 bout.

His opponent was Danny Castillo (15-5) who is now set to face Tim Means (18-4-1). Means is coming off of his first loss in three years as he dropped a decision win to Jorge Masvidal in April at UFC on FOX: Henderson vs. Melendez.

Castillo is the only fighter of the four currently fighting in this article to be coming off of a win, nabbing a decision from Paul Sass back at UFC on FUEL TV Barao vs. McDonald.

UFC on FOX 8 takes place on July 27th at the Key Arena in Seattle, Washington. The main event is a flyweight title fight between Demetrious Johnson and John Moraga.