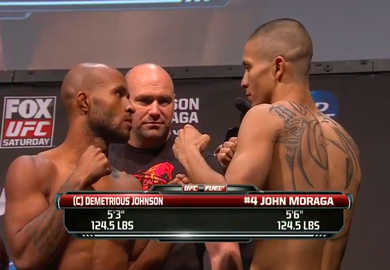 ‘UFC on FOX 8: Johnson vs. Moraga’ is going down live for free on FOX TV from the KeyArena in Seattle, Washington.

If you can’t make the live broadcast, tune in here for BJPENN.COM’s live main card play-by-play.

JESSICA ANDRADE (9-2 MMA, 0-0 UFC) VS. LIZ CARMOUCHE (8-3 MMA, 0-1 UFC)
Round 1 – The women took the stage in the first bout of the main card. Both came out aggressive with Carmouche grabbing an early clinch. She worked her control and was able to obtain a takedown which resulted in back control for Carmouche. Andrade was able to get back to her feet and take a clinch of her own, momentarily. Carmouche used her superior strength to reverse the clinch and fought off a loose guillotine attempt to gain a second takedown, in to half-guard. Carmouche advanced to side-control and eventually back control. Andrade lifted Carmouche up as Carmouche held on in the crucifix, but was shaken off and slammed to the ground. Andrade baited Carmouche up and sunk in a guillotine choke. Carmouche stayed calm and defended the choke, surviving the first round although she may have lost valuable points late in the round.

Round 2 – Carmouche caught a charging Andrade and was able to secure a powerful takedown. Carmouche advanced to full mount and landed horrifying shots on the ground in both the mount and full back control, with her hooks in. Herb Dean inched closer waiting to stop the fight. Carmouche locked in a rear-naked choke but lost the position while maintaining her control. The shots continued as Carmouched dropped stiff elbows and hard punches that landed with noticeable effect.

Andrade withstood a gauntlet of shot but in the end, fell to the devastating power of Carmouche.

Official Decision: Liz Carmouche defeats Jessica Andrade via TKO (punches) at 3:57 of Round 2

Round 1 – Both men came out with respect for the power that each other possesses. They started light on their feet while Lawler bounced forward and feinted to close the distance. Lawler landed a solid kick to the body after which he secured a takedown, immediately gaining half-guard. Voelker got back up but was still held under Lawler’s control in the clinch, Lawler stayed active offensively, landing knees to the legs and body of Voelker. Voelker was bleeding profusely already from a nose that appeared to be broken. Lawler broke the clinch and started to loosen up, putting quick combos together while Voelker threw kicks to keep distance. Lawler was constantly walking Voelker down, chasing him instead of cutting him off, but still maintaining control of the Octagon. Voelker caught a head kick that was partially blocked shrugging it off relatively easily. When Voelker started to move forward, Lawler made him pay, landing hard kicks to the body and a flying knee as well, countering Voelker and chipping away at his confidence.

Lawler resumed walking forward and started to open up. He was quick to get in and out on his combos and landed another flying knee while avoiding the counter combination to end the round in impressive fashion.

Round 2 – Voelker started round 2 as the aggressor, coming forward, looking to make up for a bad first round. Lawler made him pay once again, landing a flush head kick that put Voelker down for the count. One more punch which was academic at that point, just to finish the show. This marks Lawler’s second finish in his previous two fights making him 2-0 in his latest UFC stint.

JAKE ELLENBERGER (29-6 MMA, 8-2 UFC) VS. RORY MACDONALD (14-1 MMA, 5-1 UFC)
Round 1 – Perhaps the most anticipated fight on the card, the two top-ranked welterweights went to war in the co-main event. Both took the center of the Octagon immediately, looking to establish dominance. MacDonald landed first with a reaching jab. Ellenberger looked to load up on his shots. MacDonald stayed patient on the outside and lunged in as he tried to establish a consistent jab. Ellenberger shot in as well except he tried to land as much as he could in the short time he was in the pocket. MacDonald was prepared to step back and let Ellenberger miss. MacDonald would also circle while throwing the jab. Ellenbeger was able to land a quick knee, one that did little to no damage. MacDonald looked not to counter but to avoid the shots of Ellenberger, only striking on the offensive and to finish a combination that started with that long jab. MacDonald stayed on the outside and landed several more jabs. The round ended with a brief clinch and separation.

Round 2 – MacDonald landed a front kick early, using it like his jab to keep distance and force Ellenberger to hesitate. MacDonald seemed to change-up his strikes early in this round, throwing kicks and hooks to keep Ellenberger guessing. Ellenberger still looked to load up and close the distance quickly, but found it hard to do so as he waited to dodge the jab instead of setting up a combo of his own with his head off-center. Ellenberger shot in for the first attempted takedown but was stuffed against the cage by MacDonald. MacDonald was very content to stick with the jab, catching Ellenberger each time he approached as well as on the outside, completely at will. Ellenberger was unable to land anything as he hesitated on all of his movements. This round finished with MacDonald avoiding a lazy hook from Ellenberger.

Round 3 – MacDonald stuck to his solid plan and didn’t let the frequent boos from the Key Arena get to him. He stayed patient and worked a stinging jab on Ellenberger. Ellenberger faked a takedown in an attempt to catch MacDonald sleeping, but to no avail. Ellenberger landed a hook in a brief moment of success but it didn’t amount to anything significant. After a slip by MacDonald, Ellenberger seemed to grow impatient. He looked for a Hail Mary late in the round but not with enough urgency. MacDonald continued to jab, a move that completely shut Ellenberger down. Ellenberger was able to gain a takedown in the final minute of the fight but was controlled from MacDonald’s guard. MacDonald kept a tight butterfly guard and even threatened with a triangle choke, gaining even more points for his efforts.

CHAMPION DEMETRIOUS JOHNSON (17-2-1 MMA, 5-1-1) VS. JOHN MORAGA (13-1 MMA, 2-0 UFC)
Round 1 – The flyweight belt was on the line in the main event of UFC on FOX 8. Moraga came out and took control quickly. He looked to change levels early, ducking his head as he lunged towards the champ. Johnson looked his usual speedy self, floating above the ground while putting jabs together. Moraga worked his leg kicks to slow Johnson down as he attempted to rack up the damage to the leg of Moraga. Moraga held on to a clinch half way through the round but was reversed, and placed against the cage by Johnson. Johnson was able to get the first takedown of the fight but landed in a guillotine, although it was brief. Johnson moved to the mounted crucifix and landed a few short elbows before being pushed to Moraga’s half-guard. Johnson remained active and scored valuable early points. Moraga threatened with a leglock but Johnson escaped, ending up in the sprawl. Johnson held the position and locked in a solid standing guillotine but the round ended before it became trouble.

Round 2 – Johnson landed another takedown early in this round. He moved to side control after standing up in the guard and dropping a punch. Johnson was dominant and secured another mounted crucifix. Moraga bucked out of the crucifix but caught some good punches while in the position. Johnson never let up, and made it through an inverted triangle attempt to wind up back in side control. Johnson threatened with a kimura as he used the submission attempt to land punches. Moraga got back to his feet, all the while getting hit, just to be suplexed to the mat once more.They stood up once more, this time with Moraga going for the takedown. He was unable and Johnson broke the clinch and circled away to safety. Johnson shot in from a sizable distance  and secured a double-leg on Moraga to notch a fourth takedown in the fight. Johnson looked extremely aggressive as he constantly threatened with submissions to Moraga’s arm and landing punches any chance he could get.

Round 3 – Moraga was efficient on the feet, jabbing at Johnson and looking for combinations. Johnson stayed on the outside and eventually set up another clean takedown. Johnson again stood up and moved to side control while subsequently taking Moraga’s back. Moraga escaped back to his feet and the stand up game resumed. Moraga initiated the clinch this time and worked hard for a trip. Once he got Johnson off-balance, he threw his weight in to the takedown, only to be reversed, ending up on his back. Johnson locked in a solid kimura this time, staying patient and setting up maximum torque. Moraga miraculously escaped and ended up on top of Johnson. Shortly after, Moraga was finally able to land a full takedown of his own. Johnson slid out from under Moraga quickly and got back to his feet, ending the round backing up from a hard-charging Moraga.

Round 4 – Moraga had a renewed sense of confidence in this round, throwing loosely. That confident streak came to a screeching halt once Johnson once again landed a takedown. Johnson stayed heavy on top and looked to submit Moraga from the sprawl, eventually letting it go to first advance his position. Moraga was allowed back to his feet where Johnson worked body kicks in to the mix. Johnson made his takedowns look easy at this point, barely setting them up and adapting on the fly to bring Moraga down. They wrestled back to their feet with momentarily. Johnson landed an illegal knee to a downed Moraga’s head but it didn’t result in damage and the fight wasn’t broken up. Moraga landed a hard right hand that caught Johnson advancing. Johnson winced, clearly hurt by the counter shot. Johnson was still able to land a takedown to get out of danger and ended the round on top, hurt for the first time in the fight.

Round 5 – Moraga came out going for broke after the hard shot late in the fourth. Johnson landed yet another crisp and precise takedown, advancing instantly in to side control. Moraga escaped beautifully but pulled guard. Johnson now held a sprawl on Moraga who seemed to be low on gas this late in his first 5-round UFC bout. Moraga struggled back to his feet halfway through the round, just to give up another takedown and more energy. Johnson got into side control once more and worked a kimura on a now much more tired Moraga. Johnson used the kimura to set up a flawless armbar, ending the fight late in the fifth round.

Official Decision: Demetrious Johnson defeats John Moraga via Submission at 3:43 of Round 5

Liz Carmouche defeats Jessica Andrade via TKO (punches) at 3:57 of Round 2.

Robbie Lawler defeats Bobby Voelker via Knockout (head-kick and punch) at :24 of Round 2.

(c)Demetrious Johnson defeats John Moraga via Submission (armbar) at 3:43 of Round 5.