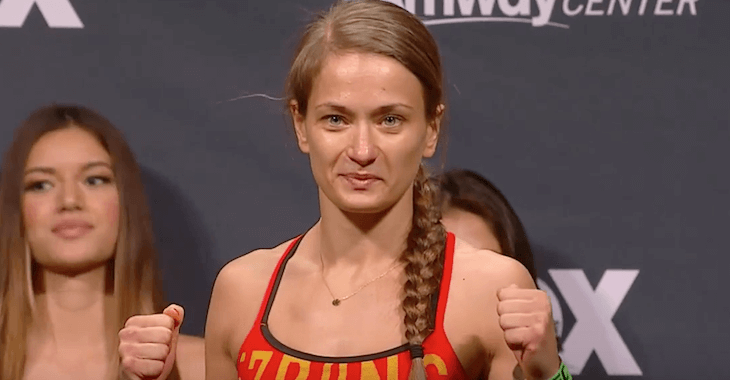 A women’s strawweight tilt between Randa Markos (5-3 MMA) and Karolina Kowalkiewicz (8-0 MMA) kicked off the UFC on FOX 17 main card in Orlando, Florida.

Markos gets things started by throwing a huge right that just misses. Big shot lands for Karolina. Markos is trying to get inside but Karolina is showing some excellent footwork to stay on the outside. Markos is pushing forward but her punches aren’t finding a home. Decent combo lands for Karolina. Markos clinches up and presses Karolina against the cage in hopes of a takedown. Markos landed a good right hand just before the end of round one.

Karolina begins round two by landing a solid punch followed by a leg kick. Randa is trying to land a big right but she is not finding the target. Good combo from Karolina. Markos scores a trip and gets Karolina down but it’s short lived. Randa has Kowalkiewicz pressed against the fence and ends up dragging her to ground in back mount. Karolina is on her feet but Markos is on her back with a body-triangle locked in. Karolina dives back down in hopes of shaking Markos off her back but it doesn’t work. Randa is searching for the submission but Karolina is defending well and survives round two.

Karolina starts off round three with a good combination. Markos is trying to land that big overhand right but it is still not finding a home. Randa charges forward with punches and backs Karolina in to the fence. Big takedown from Markos but Karolina sweeps an winds up in half guard. Full mount now for Karolina who is dropping bombs on Markos. Huge shots from Karolina who is determined to get the finish. Markos is tough and fights back to half guard and then returns to her feet. Great fight from the ladies. It’s up to the judges now.