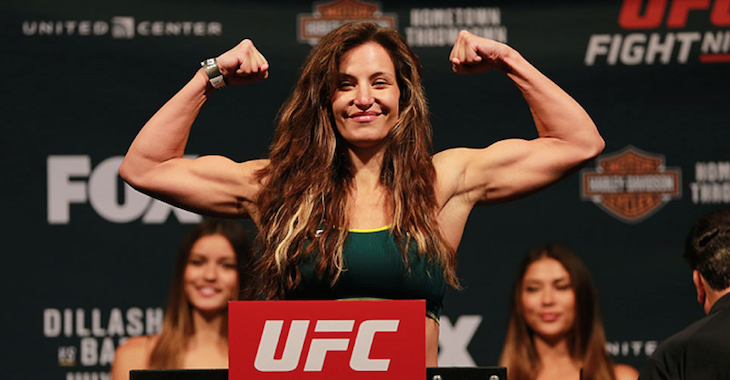 In the night’s co-main event Miesha Tate took on Cleveland’s Jessica Eye for what could potentially be the number one contender spot.

In the first round Eye looked to be doing a good job landing jabs and getting out of the way of Tate’s punches. She showed good side to side movement. Eye tagged Tate with a big punch. Later on Tate connected and Eye stumbled a little and smiled. Then she got dropped by Tate. Tate rushed in and got on top, and went to work in half guard. She kept the position until the end of the round.

In the second Tate looked to land that same right hand that dropped Eye in the first. She got Eye in the clinch on the cage, but Eye managed to get free. Tate connected with that overhand right and got Eye to the ground. Eye managed to tie her up with a headlock using her legs for a moment, then Tate got free and went to work on top. Working from half guard Tate tried for a guillotine but time ran out.

In the third both fighters worked on their feet for most of the round, until towards the end Tate managed to get a takedown. Tate worked to the back and locked in both hooks. She tried for the takedown but Eye did a good job holding her hands. In a strange move therefore decided to stand them up with about 20 seconds left. They went after each other until the round ended. Pretty obvious win for Tate.