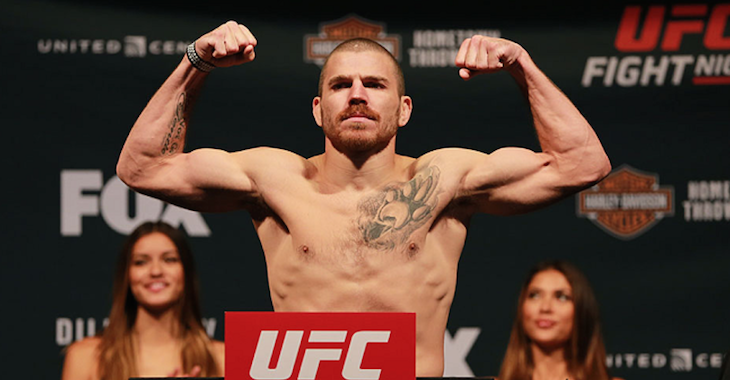 Team Alpha Male’s Danny Castillo took on veteran Jim Miller in what was sure to be a fan favorite fight.

Early in the first Miller landed a leg kick. Castillo ducked down like he was going for a takedown but Miller shrugged it off. Moments later Castillo threw a head kick but Miller caught it and got the takedown. He quickly moved to mount. Castillo looked to roll over but Miller had his arm, ready to get an armbar if he did, so Castillo moved back to his back with Miller on top in mount. Miller tried for a backwards triangle but Castillo eventually got out and took top position in Miller’s guard. Castillo through some shots on the ground and eventually stood up.
Right at the end of the round Castillo tried for a flying knee but it looked to be blocked.

The second round took place on the feet entirely. Castillo looked to land a big head kick several times during the round, but never connected cleanly. Miller did good job landing a one two combo, then following up with a big leg kick. No one really got much of the advantage in the standup. Miller was the aggressor though, walking Castillo down for most of the round.

In the third it looked to be the same thing, then Miller caught a kick and landed a big punch, while taking Castillo to the ground. It didn’t stay there long and Castillo managed to get back to his feet. Castillo tried for a takedown but failed. Castillo connected with a big body kick but Miller answered right back with a leg kick. Late in the round, like with thirty seconds left Castillo managed to get the takedown and kept top position until the fight ended. An extremely close fight.