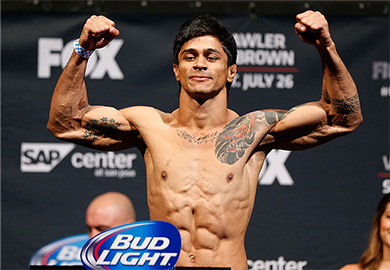 Tiago Trator and Akbarh Arreola put on a grueling performance inside the octagon tonight in a bout that closed out the UFC Fight Pass preliminary portion of the card. Trator may have shown signs of fatigue throughout the fight, but he put 100% power in his punches until the last second expired.

Arreola did a decent job at lunging in and picking his shots from outside striking distance, but his defense was almost nonexistent and would get countered by Trator’s power-shots.

Trator got tripped up a couple times with leg kicks and he fell to the canvas, but Arreola did not capitalize on this and allowed Trator to get back to his feet immediately. This was the story of the bout for Arreola; He would take a step in the right direction but never followed up on his momentum.

Tiago Trator picked up his tenth straight win tonight after being announced the winner.