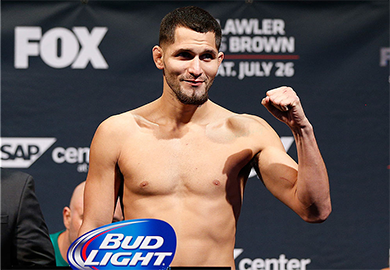 Daron Cruickshank had the “W” in his sights when he dropped Jorge Masvidal with that vicious left hand in the opening minutes of the fight, but Masvidal showed amazing heart and made a great comeback for the victory.

Cruickshank connected with a big left hand in the first round and the crowd erupted. Masvidal looked to be out-cold, but he recovered before he even hit the canvas. He protected his fall with his elbow and was invited back to his feet by a confident Cruickshank. Cruickshank’s judgement was off as he thought Masvidal was more hurt than he let on to be. Masvidal popped right back up and showed he was “all there” with his exciteable stance. Masvidal knew from that point on that he had to take the fight to the ground if he wanted the victory.

The second and third rounds was an amazing showcase of skill for Masvidal. It was relatively even in the second until Masvidal came out on top of a scramble and he almost put Cruickshank away with a D’Arce twice. The round was so dominant that one judge scored 10-8 in favor of Masvidal.

The third round was much of the same and without his feet, Cruickshank was unable to let out one last burst from the ground to get the win. Masvidal had dominated the grappling game and had his hand raised when the judges’ decision was read.