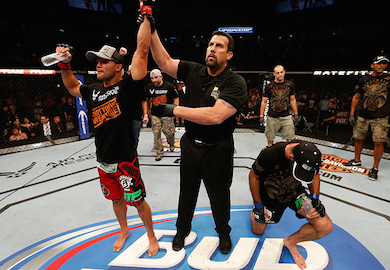 At the start of the bout, “Ruthless” Robbie Lawler looked like he was in another class than his opponent “Immortal” Matt Brown.

Lawler easily peppered Brown with counters that marked Brown’s face up rather quickly. Brown was the faster fighter of the two, but Lawler cut off his attack with counter uppercuts and hooks and Brown was not aware of this until he made it back to his corner at the end of the round. Regardless, Brown pushed through the punishment and started to gain confidence when he found success changing levels— specifically setting up body kicks with expected high kicks.

Brown continued to ride his wave of momentum in the second as he outstruck Lawler almost two-to-one. Brown cracked Lawler with a lunging right hand early in the first round and tried to repeat the process in the second, but Lawler was prepared and dodged it every time.

Round three saw some controversy as the referee stepped in when he did not need to. Lawler landed a grueling body shot to Brown who doubled over in pain. The referee halted the fight and gave Brown five minutes to recover insinuating it was a low-blow. Upon further review those in attendance could see it landed above the belt deeming it a legal shot. This allowed Brown to recover and make it to the end of the round.

Matt Brown had never ventured into the “championship” rounds at this point and Lawler wanted to welcome him by making him as tired as possible. Lawler shot for a takedown right off the bat and forced Brown to carry his bodyweight for the majority of the fourth. Lawler would benefit greatly from this as it took a lot of pep out of Brown’s punches and kicks.

The remainder of the fourth and fifth rounds saw Lawler pick Brown apart while Brown gasped for air, looking up at the clock. Brown showed rays of brilliance and landed some decent shots that snapped Lawler’s head back, but there was no way he was finishing “Ruthless” with his gas-tank running on fumes.

When the decision was read, it was made official that Lawler would be next in line for a shot at the title.