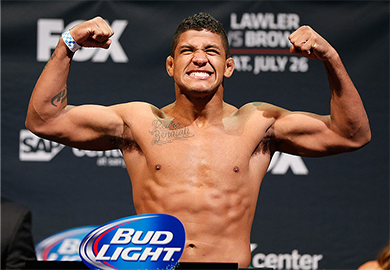 Welterweights Andreas Stahl and Gilbert Burns made their debuts tonight and left it all in the octagon. Burns may have walked out with the decision win, but Stahl displayed a “Never Surrender” attitude that forced him to keep pressing forward.

Stahl suffered what seemed to be a broken nose within the first couple minutes of the fight and that affected his breathing throughout the bout. Despite suffering the break, he continued to hack away at the legs of Burns with leg kicks to take away his speed.

Gilbert Burns, training partner of Vitor Belfort, did not let the leg kicks stop his fast-paced method of attack. Burns dictated where the fight went and forced Stahl to fight HIS fight, which will always give you the advantage in the eyes of the judges.