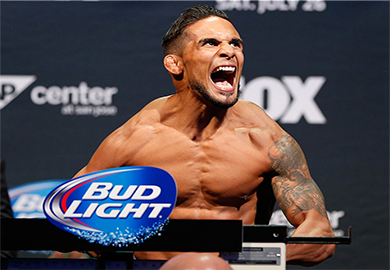 Needless to say, the first round did not go too well for Clay Guida. He knew he was not going to win a striking-contest with Bermudez so he tried to take the fight to the ground. When Guida shot for a takedown, it was easily stuffed by Bermudez and this process repeated itself throughout the first two minutes of the fight. Bermudez repeatedly caught Guida with combinations and eventually busted him wide open with a knee to the face. When the fight finally went to the ground, it was Bermudez who benefited from it as he took the back of Guida and peppered him with shots until the end of the round.

Looking into the corner of Clay Guida after the first round, you would have never guessed he was being coached by Greg Jackson. Usually calm, Coach Jackson was talking miles a minute, trying to formulate a gameplan that would aid Guida in avoiding a beatdown like he just took. Bermudez’s corner on the other hand was calm and positive— you’d think he was walking into the middle of the octagon for the beginning of a fight.

Dennis Bermudez masterfully took the back of Clay Guida and applied the body triangle in the middle of the second round. Guida, usually scrappy and lively, did little to fight off the rear naked choke attempt and it was a matter of time before he was going to black out. Guida contemplated passing out, but he opted for the safer route and tapped.