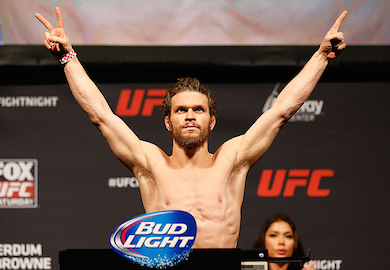 Ray Borg lived up to his nickname of ‘The Tazmexican Devil’ in his octagon debut tonight. He had a tough test in front of him in #8 ranked Dustin Ortiz who has a lot of octagon experience under his belt.

Borg and Ortiz shared almost the same amount of top position time in what could arguably have been a first round tie. For the small amount of time that was spent standing, Ortiz outstruck Borg. Borg showed rays of brilliance in his grappling awareness when he jumped on the back of Ortiz a split second after he would expose it. Ortiz got slammed twice, but he always found his out of danger.

Ray Borg almost picked up the win in the second round when he cinched in a rear naked choke. He set it up brilliantly by, once again, hopping on the back of Ortiz when he exposed it for a brief moment. Borg transitioned to a body triangle and was patient in looking for the choke. Ortiz once again showed great resiliency and made it to the end of the round.

Dustin Ortiz looked to return to his striking roots in the third round. As a training partner of the Pettis Brothers, Ortiz has what it takes to finish the fight standing. He landed two huge kicks and established a comfortable distance to jab from but Borg found a way to tie the action up with a clinch when he was in trouble. Borg was the first to draw blood in the middle of the third round after he cracked Ortiz with a jumping knee. Borg likely locked the victory up with a minute left when he picked Ortiz up and slammed him for a third time (total of five takedowns).

The judges saw it differently, however. The split decision victory went to Dustin Ortiz and he thought his ability to strike gave him the final nod.