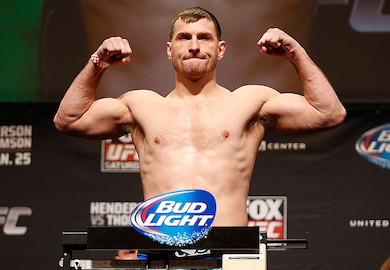 Gabriel Gonzaga has proven that the still deserves to be in he UFC during his current run and tried to keep his win-streak alive tonight. He put on a brilliant performance in the first round but it seemed like his tank ran out of gas early on. At the start of the second round, his mouth was wide open and he was gasping for air.

Gonzaga chopped away at the leg of Miocic in the first round and it looked like Miocic was going to have trouble walking on it throughout the fight. Fortunately for him, Gonzaga started to gas and he abandoned the gameplan. Instead, Gonzaga shot for a takedown at the end of the first and was successful in landing it. Miocic would pop right back up and that’s where he could tell Gonzaga was starting to tire out.

Miocic simply peppered Gonzaga with shots for the remainder of the fight. In the condition he was in, the only shots Gonzaga was connecting with were wild ones that were not even landing on target. Miocic even took the fight to the ground once and dominated on top, landing hammerfists and elbows to the body.

Gonzaga made it back to his feet with ten seconds left in the fight but he did not find the miracle knockout blow he was looking for. Instead, Miocic’s hand was simply raised as he was awarded the unanimous decision win.