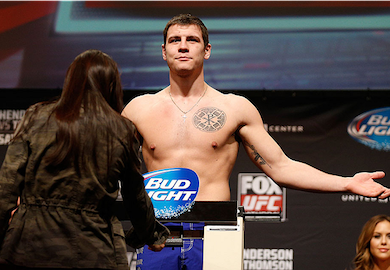 Nikita Krylov needed less than thirty seconds to knock Walt Harris out in his second bout inside the octagon.

In a fight that lasted only twenty-five seconds, Krylov did an amazing job at setting up his headkick knockout blow with the time he was given. He started out by kicking the legs of Harris, and transitioned to keeping him at bay with teep-kicks to the gut. Walt Harris was head hunting but kept one hand high, blocking the head kick that was expected to come.

Krylov threw what looked to be a body kick, but arched the kick higher and cracked Harris on the side of the head with his foot. Krylov had stumbled Harris with a question mark kick and knocked him down with a follow-up glancing hook. Krylov postured over his opponent and started to connect with strikes until the referee pushed him off.