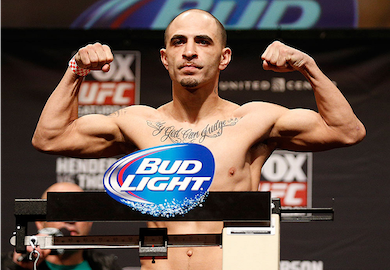 In a slow first round, it was Meza that would land the first takedown. While working for a transition, Camus executed a beautiful reversal and ended up on top for the remainder of the round. While Meza successfully took him down, it was Camus that should have been awarded the round for the amount of time he spent on top.

The second round started off the same way except with the roles reversed. Camus dropped Meza with a solid right hand and plopped on top of his opponent. Meza was able to reverse a transition attempt and end up on top. After inactivity, the referee stood them up and this allowed Camus to regain his momentum. Within minutes he had the back of Meza and was looking for a rear naked choke, but Meza stood up and shook him off. Camus would take the second round and Meza walked into the third with a sense of urgency.

Meza was bouncing around on his feet and threw a kick to the body of Camus which allowed Camus to land a takedown. The rest of the round saw Camus transition at will from full mount to back mount.

While Camus had plenty of time to lock in a submission while having control of Meza’s back, he simply could not finish the fight. Regardless of the fact, Camus was dominant and his grappling game is what won him tonight’s fight.