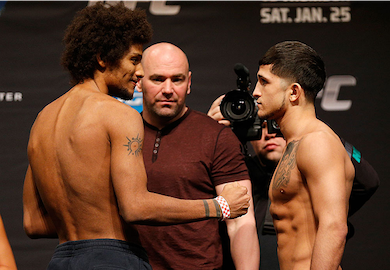 ‘UFC on FOX 10: Henderson vs. Thomson’ goes down tonight from the United Center in Chicago, Illinois.

Starting at approximately 1:30 p.m. PT, BJPENN.COM, will be providing fight fans with live up to the minute results and blow-for-blow/round-by-round coverage.

If you can’t make the live event, or can’t catch this preliminary event on FOX Sports 1, join us here for all the action.

Round 1 – Here we go, folks. It is 4:30 ET and we are ready to get these fights underway. Krylov is keeping Harris at bay with body kicks. Harris keeps pressing forward and is firing off hooks, but none of them are landing. Harris takes a right high kick to the dome! Krylov has connected right over the gloves with his kick and Harris is backing up. Krylov lands a glancing hook and Harris falls down. The referee calls a stop to the fight before Harris can take anymore punishment!

Round 1 – They touch gloves and we are underway. Rhodes is keeping his distance. Sullivan hits a leg kick but it didn’t land strong. Rhodes’ high kick is blocked. Rhodes switches his stance and throws a kick to the body, but it is blocked. Sullivan’s head kick is blocked. Sullivan’s leg kick is checked. Sullivan misses a spinning back kick. Rhodes lands a takedown. Sullivan gets back up and is pressed against the cage. Sullivan escapes the fence and they’re back in the middle of the octagon. They’re even in total strikes. Sullivan’s combo pushes Rhodes to the fence but he cannot complete the takedown right away. Sullivan picks Rhodes up and slams him down softly. Rhodes is back up, but gets taken down again. Rhodes is working for a kimura/armbar and Sullivan uses that as an opportunity to transition to full mount. That’s where the round will end. 10-9 Sullivan

Round 2 – Sullivan is keeping the action busy with his weak jab. He uses the jab to set up a powerful leg kick. Rhodes’ push kick lands kind of low but Sullivan says it did not hit his balls. Sullivan dodges a lunging right. Rhodes pushes Sullivan into the cage and knees his body. Rhodes almost lands a head kick. Rhodes lands a couple knees and tries to follow it up with more, but he can’t connect with more. Sullivan is starting to look tired and his hands are lowering, which allows Rhodes to land some more shots. He is starting to loosen up. Rhodes connectsd with a soft, lunging jab. Sullivan goes into the clinch and lands a knee to the body. Rhodes has Sullivan pressed against the cage and Sullivan forces them to switch position. Rhodes switches it back. Rhodes is trying very hard to drag his opponent down to the ground but can’t land a takedown. The round ends with Sullivan shooting for a takedown of his own. 10-9 Rhodes

Round 3 – Sullivan eats an overhand right. Rhodes lands a leg kick. Sullivan lands a body punch. Rhodes blocks a body kick. Sullivan rolls with Rhodes’ overhand right so it doesn’t do too much damage. Sullivan connects with a couple good right hands. Rhodes’ body kick lands. Sullivan tries to throw an overhand right and he uses that as a set up for a takedown attempt. Rhodes will have none of it and presses Sullivan against the cage. Rhodes is obviously tiring out. We have two minutes left to go and this is a close fight. Sullivan is throwing a big overhand right and it’s just missing. Rhodes’ spinning back kick lands to the gut of Sullivan. Rhodes’ left hook lands and shakes Sullivan’s head. Rhodes lands another nice kick to the body. The fight ends with the two jockying for a takedown which Rhodes landed. Very close round with not much action. 10-9 Rhodes

Daron Cruicshank def. Mike Rio by way of TKO (Kick and Punches) 4:56 of Round 2

Round 1 – Viana knocks Hernandez down with an overhand right but he recovers quickly. He’s already back on his feet. Viana tries to land a overhand right again after two jabs, but it’s blocked. Body kick from Viana. Hernandez hasn’t really landed much at all. Viana is throwing that right hand often. It hasn’t landed since that first one. As I type that, he lands two in a row. Hernandez misses a three punch combo. Viana lands two shots of a four punch combo. Hernandez clinches and pushes Viana away after eating some shots. Viana dodges a wild overhand right. Nice inside leg kick from Viana. 10-9 Viana.

Round 2 – Hernandez is a lot more active now at the opening of the round. Hernandez is already slowing down. Viana is backing up and is cocking his right hand ready to counter, but he misses his right and a left hook. Hernandez lands a decent left hook but it doesn’t do anything. Viana lands a right hook and Hernandez counters it with a left of his own. Viana is still unfazed by it. Body shot from Viana. Hernandez misses with a jumping knee. Hernandez is keeping the pressure on Viana but is not following up in the least. Viana comes over the top with a right hand and it lands. Hook to the body lands for Viana after Hernandez whiffs on a hook. Round ends. 10-9 Viana

Round 3 – Hernandez is once again a bit more active to start the round, but a minute in he hasn’t thrown many strikes let alone connect with them. Over hand right from Hernandez lands, he follows up with an uppercut. Jab/overhand right combination lands for Viana. Viana throws a punch and it lands on the gut of Hernandez. Hernandez is starting to push forward regardless of getting hit and he’s starting to put punches together. Viana is getting a little tired and his punches are starting to look wild. Left hook lands for Viana. Hernandez mocks Viana for running away from him and backing up, but that’s not going to do much after he got his butt handed to him for two rounds. Big left hook lands for Hernandez, then a right and he’s starting to gain momentum. Too little, too late though. Horn sounds. 10-9 Hernandez

Round 1 – Camus lands a leg kick. Leg kick from Meza, and again. Meza does a really good job at dodging all of Camus’ shots and shoots for a takedown. Camus defends and is now pressed against the fence. Meza drags him down and is in half-guard. Meza tries to transition out of half-guard and Camus flips him over on his back. Camus is now in Meza’s guard. Camus transitions to half guard. Meza is doing a great job at blocking the pass. Meza now has him back in his guard. Camus postures up and throws some punches. Referee stands them up with nothing much going on on the ground. Ten seconds left and the horn sounds. 10-9 Camus

Round 2 – Camus drops Meza with a right hand as he lands on top of him, but Meza quickly recovers. Camus tries to tansition but Meza reverses it and is now on top! It’s like the exact opposite of what happened in the first round. Meza is in Camus’ full guard. Meza postures up and throws some strikes. The crowd is booing and the referee stands them up. Camus lands a big right hand as they meet in the middle of the cage and lands a big slam. He is now in Meza’s open guard. Camus is working to transition and ends up in mount. Meza showed aggression in trying to sweep Camus and gave up position. Camus transitions to Meza’s back and is now working for a rear naked choke. Camus abandons the choke attempt and gets back to full mount with a minute left. Meza gives up his back again. He stands up and tries to shake Camus off and succeeds. Meza presses Camus against the cage and is looking for the round to end. 10-9 Camus

Round 3 – Meza opens up the third round with a sense of urgency and is bouncing around on his toes, preparing himself to open up with his striking. This allowed Camus to get enough momentum to take him down. Camus is once again in full mount and transitions to the back of Meza. Meza has one of Camus’ arms under his chin and he is in trouble. Meza pulls the arm out of there but Camus goes right back to full mount; always on the attack. Camus lands an elbow and Meza doesn’t like that one bit. Meza tries to buck out but Camus transitions right back to back control. Meza stands up and Camus takes him right back down. The rest of the round sees Camus transitioning between full mount and back mount. 10-9 Camus

Round 1 – Wineland steps right to the center of the octagon. Leg kick from Wineland. 30 seconds in and Jabouin has yet to throw a shot. Jabouin’s head kick is blocked. Wineland lands a left hook. Jabouin blocks an uppercut. Right hook to the body by Wineland. Left hook by Wineland. Jabouin lunges with a right hook and Wineland blocks it while countering with one of his own. Quick head movement by Wineland and a beautiful counter shot as Jabouin misses a jab. Two kicks to the body by Jabouin. Roundhouse kick by Jabouin lands and Wineland presses the action right after. Leg kick from Wineland. Jabouin lands a snapping kick to the body. Wineland shoots for a takedown but Jabouin sprawls. Round ends as Wineland misses an uppercut. 10-9 Wineland

Eddie Wineland def. Yves Jabouin by way of TKO (Strikes) 4:16 of Round 2

Round 2 – Caceres lands a kick to the body. Caceres DROPS Pettis with a huge left hand! Pettis grabs onto the leg of Caceres, trying to outlast the grogginess. Caceres is working for a submission. Pettis makes it back to his feet and is very active. Pettis lands a combination of his own and Caceres has connected multiple times since he dropped him. Pettis seems to have regained his composure. Superman punch misses for Pettis. 360 degree round kick from Caceres misses. Big head kick lands for Pettis as Caceres bends down to dodge a shot. Wheel kick misses for Pettis. Barely. Right hook from Caceres lands. Spinning roundhouse kick from Pettis fails. Round is over. 10-9 Caceres

Round 3 – Caceres’ spinning wheel kick lands with a glance and they end up on the ground. Caceres goes for a kimura but fails as Pettis rolls through it. They’re back on their feet. Left hook lands for Caceres. Pettis’ high kick is caught and he gets pushed to the ground. Caceres has top control for a bit, but Pettis makes his way back to his feet. Caceres executes a spinning leg kick. Likely the first of its kind. Pettis lands a nice shot to the body. Pettis hits a right hook and Caceres runs away from the action to reset his stance. Caceres counters Pettis’ takedown and ends up on top. Pettis is working for a leg lock with fifty seconds left but cannot lock it up. This allows Caceres to get to the back mount and he’s looking for a rear naked choke! His hand is under the neck of Sergio and Sergio submits! Caceres just won the fight by submission.