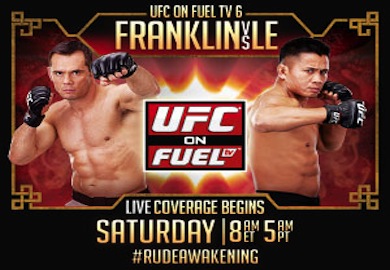 With the highly anticipated return of Georges St. Pierre just over a week away, it is easy to put everything in the MMA world on the back burner until the unification bout between longtime champ GSP and current interim champ, Carlos Condit, stake their claim in the undisputed title.

However, a stacked card is taking place Saturday morning in what is the UFC’s first trip to China. UFC on FUEL TV: Macao, is a stacked card that features a former UFC champion facing off with a former Strikeforce champion in a battle of MMA veterans that will surely be an interesting bout.

Rich Franklin takes on Cung Le in a middleweight match. Franklin is coming off of a decision win over Wanderlei Silva as Le returns back to action after defeating Patrick Cote at UFC 148.

If that’s not enough to satisfy you’re insatiable MMA appetite, the co-main event is an odd but significant matchup between Thiago Silva (in his second fight back since his suspension) fighting Bulgarian fighter, Stanislov Nedkov in what will be only his second UFC fight and first fight in over a year since his TKO victory over Luiz Cane at UFC 134.

This is a huge step up for Nedkov, fighting a dangerous light-heavyweight with a wealth of experience against top 205er’s. A win would be monumental for his career.

As for Silva, a loss to Alexander Gustafsson in “The Mauler’s” native country of Sweden isn’t that big a setback especially when coming back from a year off whether its caused by injury or suspension. Ring rust inevitably sets in. But, a loss to Nedkov would have MMA fans questioning how Silva rose so high in the ranks to fight the likes of Rashad Evans, Alexander Gustafsson, and Lyoto Machida back at UFC 94 for a title shot with then champion, Evans. Silva needs a dominate win if he wants to validate his talents and prove to everyone that he is still belongs at the top of the stacked division.

So, two fights in and you’re still shrugging your shoulders and dismissing this card as a filler before GSP’s return. Well look no further (yet) than to the welterweight clash between Paulo Thiago and Dong Hyun Kim.

Both men are tacticians in the grappling world and have proven to be leaps and bounds ahead of their competition in the clinch or on the mat, respectively, save for a few losses here and there. Both Kim and Thiago are coming off of lackluster performances, not to say that they didn’t try. Kim was unfortunately injured during a takedown by Damien Maia at UFC 148 and was unable to continue while Thiago was knocked out by Afghan fighter, Siyar Bahadurzada at UFC: Sweden.

Both have been streaky as of late as Thiago has gone 1-3 in his last four fights with the sole win coming by way of decision over David Mitchell. For Kim its a 2-2 for his last four with wins over the undersized Nate Diaz and Sean Pierson, both by unanimous decision.

A win over a big name in the division is crucial for either man to remain a threat (or relevant) at 170-pounds at a time where the title talk has never been more convoluted.

Well I’m more of a fan of the lighter divisions. Sound like you? Well former Pride lightweight champion and heavy-handed killer, Takanori Gomi is taking on multiple ‘Of the Night’ bonus winner, Mac Danzig in a fight that is surely going to require a cut man and an agile referee.

This fight is very reminiscent of the Kim vs. Thiago fight as both fighters have been streaky lately and are desperate for a solid win over a well known opponent giving the fight more potential to award both fighters a ‘Fight of the Night’ or ‘Knockout of the Night’ bonus, or perhaps both awards for the same fight.

Either way, there is no reason not to watch this card unless you don’t have Fuel TV, which pertains to a lot of you. However, not having the channel does not get you off the discussion hook as these fights have through-the-roof potential. Find a house or bar to watch this one in or at least stay up to date on social media as this shouldn’t be a card forgotten under an enormous title fight but instead consider it a taste of great UFC action as a precursor to the monumental title fight a week later. Just remember, China doesn’t go by Eastern and Pacific so the card is early. 9:00 p.m. for the main card to be exact so set those alarms and get up early to watch what could be one of the most exciting cards of the year.