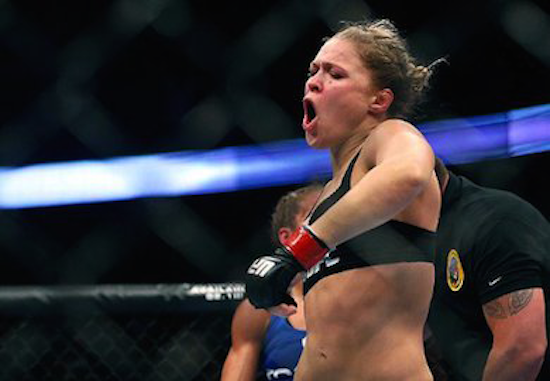 Many fans of the MMA community who are new to the sport largely were introduced to the “Rousey Train” due to her overwheming popularity in and out of the octagon.   Rousey’s emergence as the most dominant female to enter the the octagon set off at UFC 157 against former Marine and Middle East Veteran Liz Carmouche.  It was that night that she was proclaimed “Queen” of the octagon.

Less than 3 years has passed and Rousey defended her title successfully five times in devastating fashion, leaving many to think that she may be unbeatable.  We’ve all heard it many times, styles make fights.  The phrase couldn’t have been more true at UFC 193 when she was KO’d by the Jackson-Winklejohn fighter Holly Holm.

From the opening frame, Rousey was punished repeatedly for trying to pressure the former boxing champ.  Holms targeted Rousey with sniper like precision and maximized every opportunity with her trademark footwork which resulted in a Holm’s “Kick Heard Around the World.”  Highly outspoken former UFC title challenger Chael Sonnen expressed his views moving forward on the matter.

“I think that when one star goes out, another one is born,” Sonnen said.  Sonnen stands by the statement addressing that the promotion weathered the loss of Lesnar, GSP and BJ Penn to name a few.  “Ronda was a very unique personality.  She’s very likable and marketable.  Holly is just a really kind and sweet person that’s a really good fighter,” Sonnen said.

“We had Brock Lesnar,” he said.  “He’s a once in a lifetime attraction and nobody has sold as well as Brock has. But boy, the company is still worth billions and billions of dollars, even without him.”

Sonnen’s pick for the rematch was an easy one, predicting another “one sided beating”.  Will we see another dominant female champion whose name isn’t Ronda Rousey?  Only time and a rematch will decide that question.