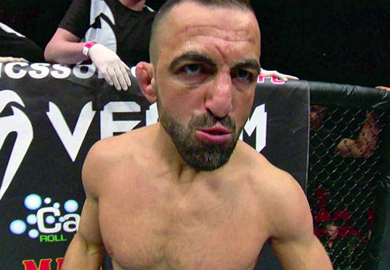 One of Sweden’s most popular fighters, Reza Madadi (13-3 MMA, 2-1 UFC), was placed under arrest on Friday, suspected of grand theft by Swedish authorities following the burglary of a high-end store in Stockholm.

Details from the original article from Expressen have been translated by a Bloody Elbow community member.

Translators note: As this is a tabloid, they do exaggerate a little bit concerning his fame and athletic success, but overall the facts are legit. Reza has really pushed the fact that he’s a law-abiding citizen who turned his life around thanks to sports, and has endeared himself to the public and become a fan-favorite and role model for youth. This latest development, if he gets convicted, will undoubtedly destroy all of that good will and fortune.

One of Sweden’s most successful star athletes, in his sport, is suspected for a smash-and-grab burglary on Stureplan in Stockholm. The loot was luxury handbags worth a million kronor (SEK). The sports star, who denies charges, was arrested after a dramatic car chase.

It was just before 5 AM on friday morning when the alarm went off in the exclusive handbag boutique “Bottega Veneta” on Birger Jarlsgatan in Stockholm. The boutiques CC TV registered how three people struggled to get inside.

– They were banging against the door with a metal object. It took probably five minutes before they were inside, an employee of the store says.

– In spite of the prolonged process, the police did not get there in time.

– When the thieves came inside they cleaned out the boutique of the most expensive bags and ran out again. They knew exactly what they wanted, continues the employee, who estimates the value of the stolen good to about a million kronor (SEK).

– The police took up the hunt for the get-away car and managed to stop them.

– “We have two in custody. One of them is suspected of grand theft, and the other for aiding grand theft,” says prosecutor Olof Calmvik.

Although they did not reference Madadi by name in the article, they did reference the “sports star’s” prior run-in with the law. Madadi was previously arrested (in 2009) for alleged involvement in a planned cash deposit heist, but he was later acquitted of all charges.

Madadi most recently fought at UFC on FUEL TV: Mousasi vs. Latifi, where he defeated Michael Johnson via 3rd round submission. That victory also earned Madadi the evenings “Submission of the night” bonus.

If convicted, Madadi could face up to 6 years in prison. Stay tuned to BJPENN.com for further updates.