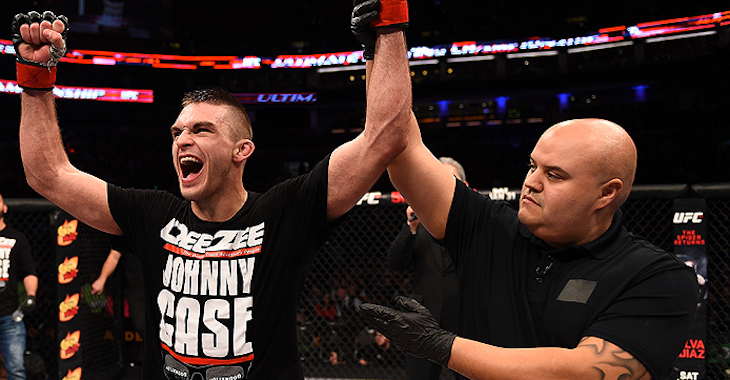 It’s not often that a fighter who is making their octagon debut walks into the cage and feels comfortable in front of a sizable crowd and bright lights. Normally, they’ll experience octagon jitters and fight safe for the win despite having an amazing training camp. However, fighters like UFC lightweight Johnny Case could have the worst fight camp and still go in there with guns-blazing.

While the night of his octagon debut was a raging success, the weeks prior were miserable and Case says it may be the worst fight camp of all time. “The fight camp couldn’t have gone any worse for me,” Case told BJPENN.COM. “I kept getting sick, I got cut—I got a tooth knocked out. That camp was awful. Honestly, the worst one I’ve ever been through.”

Despite all the issues he had leading into the camp, Case said he was actually relieved to finally make it to the octagon. “I think by the time the fight rolled around, I was just so ready for the fight camp to be over and fight again. When I was walking out for my UFC debut, I just knew that no matter what, I was going to fight. I just felt so comfortable and ready and just no pressure. Just get in there and perform.”

After a second UFC win in Boston, Case will get his third shot to go out there and perform at UFC 188 on June 13th against Francisco Trevino. While Trevino will be looking to extend his undefeated streak to thirteen wins in a row, Case is more than confident he will end it. “To be honest, from the footage I’ve seen, I’m not really impressed with him. He hits hard. He looks like a tough kid but he doesn’t look like anything out of the ordinary.”

Case continued, “I know he’s 12-0 so he’s gotta be good. But, there are different levels of good.”

Case’s confidence of being on a different level of “good” may land him a spot on the top fifteen sooner rather than later, and he says he is ready to take that challenge.

“I’ve heard that from a few people now. We’ll see where the UFC wants me. I’l certainly step up there and fight. I’d be happy to take the challenge… I’m just trying to make money, now. I know I can fight. So let’s do it. Line em up.”

Wherever Case lands next, you can guarantee he will be enjoying getting paid to travel where the UFC wants him. Case will be visiting a third country (Mexico) at his UFC 188 bout in Mexico. Having made a promise to himself to travel the world before he even signed with the UFC, Case hopes to cross off a couple more places after Mexico. “Australia, they’re doing fight cards now. Brazil would be cool, too.”

Case doesn’t care if he goes to Las Vegas or Brazil next— he’ll be ready to fight no matter what.