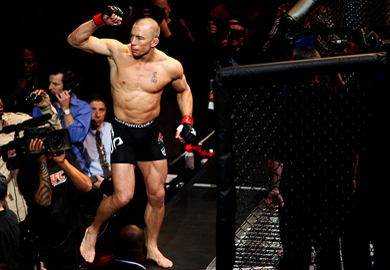 From the UFC’s inception up to current date there has been a 50% decrease in finishing rate for fights taking place inside the Octagon.

This staggering decline in finishes is broken down by Reed Kuhn from Fightnomics :
How many UFC fights end inside the distance? The overall percentage is 60%, which includes fights all the way back to 1993. But at the halfway point of 2013, that number is only 50%, year to date. I’d say “roughly 50%” but it’s not — it’s precisely 50%. Out of 176 fights so far in 2013, 88 have been finished by (T)KO or submission. That’s exactly half. How does that stack up with prior years in the UFC? Well, here’s the annual finish rate for UFC fights by year, with 2013 recorded through UFC 161.

The bad news for fans of highlight reel finishes is that the overall trend is down. But the good news is that the recent trend is completely flat, which is a level of stability never before seen in the UFC. As in troubled economies, after a steep decline “flat” starts looking like the new “up.” But there are other patterns underlying the movement of this line.

A closer look at the historical finish rate reveals how this metric is impacted by various drivers. First, notice that all fights ended in the first two years of the UFC. That’s because there was no other option; fighters fought until one of them won. There were no time limits, and no judges. When time limits were introduced in 1995, we see that immediately some fights went the distance, though they were all “draws” at first. Judges were brought in at the end of that year to declare winners of fights that went the distance, and the overall parity of competition improved throughout the decade forcing their involvement more frequently. But it was the institution of weight classes that give us the best insight into the trends during the modern Zuffa era. When finish rates hit a decade high of 75% in 2005, it was the first full year the UFC went without lightweight fights. Lightweights were officially brought back in 2006, and by 2007 the division became the most commonly competed weight class, with more fights taking place at 155 pounds than in any other division. (That has remained true every year since.) During this time, finish rates dropped 13% overall, reflecting the mix of smaller fighters. Rebounding in 2008, the finish rate hit 68% in a year where slightly more fights occurred in heavier divisions than in years prior. But this composition of divisions quickly went on a diet, and over the next two years fighters began migrating down weight classes and tilting the scales towards smaller divisions.

This period in 2009-2010 saw the greatest decline in finish rates combined with the rapid increase in televised UFC events, and likely an overall increase in the competitiveness within the UFC. In 2010 the first featherweights were introduced before the year’s end, with the WEC merger taking full effect in 2011. By 2012 the first flyweights hit the Octagon, and by then half of all UFC fights occurred at lightweight or below.Continue reading…