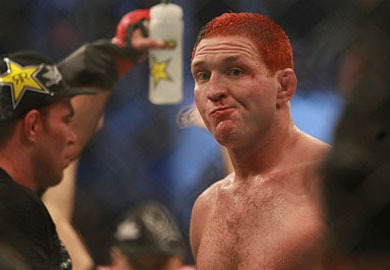 Despite being only two fights into his most recent UFC run, Jason “Mayhem” Miller has been released by the company and is “done” with all Zuffa owned promotions after a backstage incident.

Dana White made the announcement during the UFC 146 post-fight press conference on Saturday night. After confirming that Miller had been released by the company due to a backstage incident, White would not reveal any other information besides it was because “some crazy **** happened backstage” and that it was “nothing physical”. Miller was not available to respond to any questions.

Prior to the press conference, Dana White was asked if he thinks Miller should fulfill his promise of retiring if he lost on Saturday. “I think that’s a great idea.”. White elaborated, “The thing is with Mayhem Miller— his last fight was embarrassing that he had with Michael Bisping after his season of The Ultimate Fighter. Then he still comes out with pink **** on at the weigh-ins or whatever the hell he was wearing… The guy doesn’t take it serious and he looked it tonight.”

Jason “Mayhem” Miller signed with the company earlier in 2011 and was brought on along with Michael “The Count” Bisping as a coach for ‘The Ultimate Fighter’. The two put on an entertaining season filled with jokes and pranks but when fight time rolled around, Bisping was the only one laughing. Miller’s performance was not up to par with what the UFC brass and fans were expecting, and he stated he was embarrassed after getting dominated by Bisping for three rounds before the bout was called to and end.

Just this past Saturday night at UFC 146, Miller and his fans (dubbed “Mayhem Monkeys) were excited for his octagon return. Unfortunately, C.B. Dollaway put an end to all the excitement by smothering Miller for three rounds in a dominant performance. Miller’s night was not without a few shining moments, however, as he sent his opponent staggering back with power punches a couple times only to find himself on his back moments later.

After an unimpressive two fights in the world-famous octagon, Jason “Mayhem” Miller is no longer with the UFC. White finished off with, “He’s done… He’s not with us anymore”.