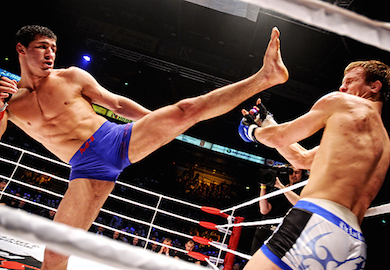 The UFC is on the hunt for Russian talent and the latest addition to their roster comes by way of Dagestan, Russia in the form of lightweight prospect Rashid Magomedov.

Magomedov joins his fellow Dagestani imports,Khabib Nurmagomedov, Rustam Khabilov and Azamat Gashimov in the UFC and according to MMAFighting.com’s Ariel Helwani, he will be making his UFC debut at UFC 169 opposite Tony Martin.

Magomedov brings in an eight-fight win streak and is a former Hand-to-Hand Combat National Russia champion. His opponent, Martin, is undefeated in 7-pro contests.

UFC 169 is set to go down from Newark, New Jersey on February 1st of the new year and features two-title fights in the main and co-main events. The return of Dominick Cruz and his unification bout against Renan Barao headline the card while Jose Aldo and Ricardo Lamas will serve as the evenings co-main event.