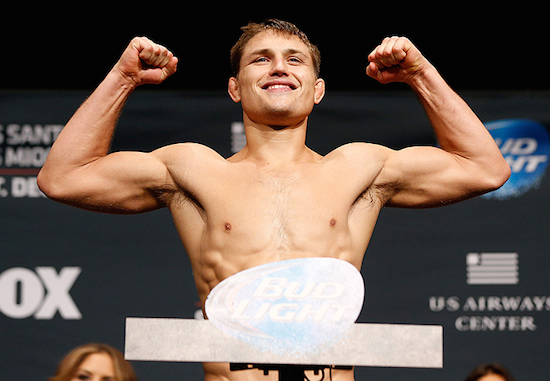 Drew Dober was a step ahead of Jamie Varner and was able to lock up a submission within the first two minutes to claim the victory. Varner admitted during the post-fight interview that he had planned to retire win or lose.

Varner had the double underhooks on Dober and attempted to throw/drag him down to the mat. Varner was pulling and all of Dober’s weight was going his way, which Varner was not ready for. Varner did not have the momentum to throw Dober over his head like he had planned and instead cracked his own head on the canvas, temporarily knocking himself for a loop.

Dober capitalized on this and went straight into full mount where he was able to set up a rear naked choke. With his forearm across Varner’s chin, Dober cranked the hold full-force and won by way of submission.

We here at BJPENN.COM would like to wish Jamie Varner success in whatever he ventures into next. He has been a joy to watch inside the WEC and UFC and it is refreshing to see someone retire with their head held high.

Drew Dober def. Jamie Varner by way of Submission (RNC) 1:52 of Round 1