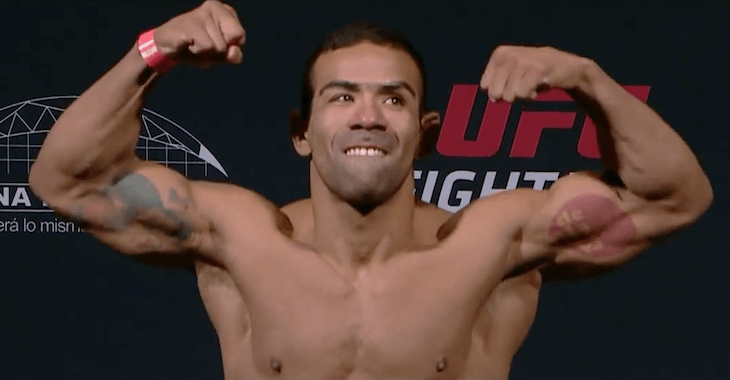 Round 1 – Lazaro opens with a kick to the legs, and Prazeres misses high. Leg kicks traded. Lazaro trying to use his jab from range. Prazeres tries to rush in, but can’t get his hand on his opponent. Prazeres with a slapping kick to the leg. Lazaro stumbles his opponent a bit with more leg kicks. Prazeres just misses with a huge right hand. Lazaro back to the jab. Prazeres fakes a shot and throws a right hand. Lazaro continues to pump the jab. Prazeres still firing heavy overhand rights, but he’s yet to land flush. Ninety seconds left. Lazaro still finding success with the jab. Prazeres misses as he dives for a takedown. Prazeres finally does land that leaping right hand and he scores a takedown with one minute left. Lazaro quickly moves back to his feet and pulls away from a choke. He resets and scores with the jab and then avoids another takedown. Prazeres scores with another counter right. Those are big. Round ends on the feet. Close round with the late action from Prazeres, but MMAjunkie gives the first to Lazaro, 10-9.

Round 2 – Prazeres catches a leg-kick, but can’t parlay it into a takedown. The fighters clinch, and Prazeres fails on a takedown. In the scramble, he pulls guard, allowing Lazaro to take top-position.
Lazaro moves to half-guard, methodically. Despite the advance calls for action from the referee, the fight continues. Prazeres moves Lazaro back to full-guard where a stalemate leads to a stand up. Back on his feet, Prazeres lands a right hand and shoots in. He presses Lazaro to the fence and momentarily gets him to the canvas, but can’t keep him there. Lazaro lands a pair of jabs, then defends against another takedown before the horn.
Bleacher Report scores Round 2: 10-9 Lazaro

Round 3 – Prazeres with a kick to the legs. Lazaro goes back to the jab and pops his opponent twice. More jabs as Prazeres looks to throw the big right. Multiple jabs rifling in. Prazeres tries the big leaping shot, but he eats a slick counter right. Prazeres trying to force the issue, while Lazaro happy to evade and counter. Lazarp with the jab, picking up points with three minutes left. Two more jabs. Prazeres leaping in with a big left. He drives in for a double leg, but Lazaro sprawls against the cage. Prazeres switches to a single and gets Lazaro to a knee, but he stands right back up. Lazaro trying to switch around to the back, and he winds up falling to his back and pulling guard. Lazaro on top. Prazeres again ties things up, and we get a restart in the final minute. Prazeres again trying to rush in, and he winds up falling to the floor. Lazaro doesn’t follow. Prazeres brought to his feet, and the round ends there. MMAjunkie gives the final round to Lazaro, 10-9, awarding him the fight 29-28.
Results: Prazeres wins via split decision 29-28×2,28-29)