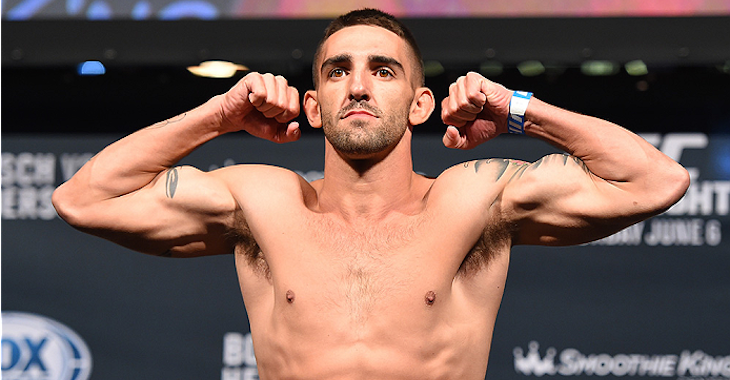 The third fight of the evening featured a lightweight bout between Justin Edwards (8-4 MMA) and Joe Proctor (10-3 MMA).

Proctor started off with some early leg kicks. Edwards moved forward with punches and pushed Proctor into the clinch. Proctor attempted some knees from the clinch, but Edwards pulled away and fired off some shots. Proctor landed a solid right hand, but Edwards absorbed it, moved forward and landed a takedown. Proctor immediately returned to his feet and began working his jab. Proctor landed a solid combination and returned to working Edwards legs. Edwards landed a spinning kick as round one came to an end.

Edwards began round two by pressing forward and throwing leather. Proctor responded with some punches of his own. Edwards decided to try and utilize the clinch and landed a few decent knees inside. Proctor escaped the clinch and went back to center of the octagon. Edwards landed a nice right hand but Proctor returned fire with a quick jab. Joe continued to work the legs of Edwards. Justin rushed in and landed a takedown, but Proctor was once again able to spring right back to his feet. Joe finished round two by landing some solid counter strikes.

Edwards began round three quickly, trying to pressure Proctor in to making a mistake. Joe answered with some solid jabs. Edwards dove in for a takedown but Proctor was able to use his sprawl to keep the fight standing. Solid left hand from Proctor caused Edwards to retreat. Joe pressed forward and landed some more solid shots on Justin. Edwards dove in for another takedown attempt but ended up in a guillotine choke. Justin scrambled and Proctor was forced to let go of the submission. Both men returned to the feet and Proctor pushed forward with punches. Joe got Edwards in another guillotine choke hold and fell back in to guard. Edwards tried to pull his head out but was put to sleep in the process.

RESULTS: Joe Proctor wins via submission (guillotine choke) 4:58 of round 3