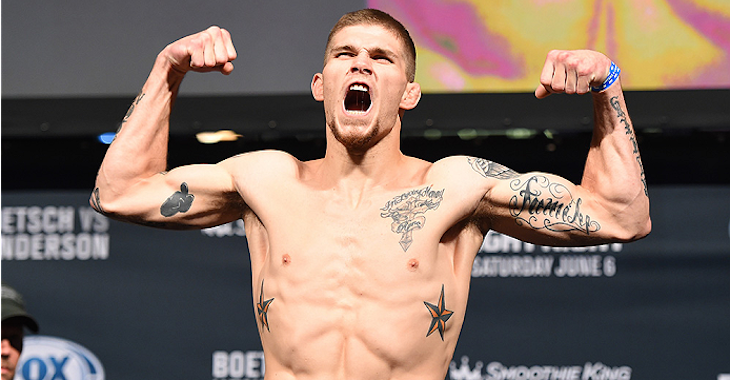 The second fight of the evening featured the middleweights, as Ricardo Abreu (5-0 MMA) took on Jake Collier (8-2 MMA).

Collier landed a couple of good jabs to begin round 1, and Abreu returned fire with some solid left hooks of his own. Both men were happy to stand and trade early on, but it was Abreu who was landing the harder strikes. Collier began to use his range and started to mix in some good kicks. Abreu tried to shoot in for the takedown but Collier shrugged him off with ease. The fighters clinched and the horn sounded to end round 1.

Collier started round 2 by landing another solid jab. Abreu replied with a front kick that just missed the chin of Collier. Jake began landing some solid body kicks and Abreu appeared to be slowing down. Abreu pressed inside to try and get a takedown, but Collier wasn’t having it. Jake landed a solid high kick but Abreu just smiled and pressed forward. Abreu pushed inside once again and was finally able to land a takedown. Ricardo moved to half guard and landed some decent body punches on Collier before the horn.

Both fighters asked the crowd to come alive to start round three. Collier landed a solid push kick to get things started. Collier utilized some nifty footwork to keep Abreu on the outside and began picking him apart with the jab. Abreu desperately dove in for a takedown and was able to get Collier back to the floor. Jake was not down for long, as he was eventually able to push Abreu off and return to his feet. Collier landed a good right but it was returned by a solid left hook from Abreu. Jake seemed to be a bit wobbly, but continued to mix up his punches and kicks to keep Ricardo at bay. The final minute was a slugfest and the crowd acknowledged the fighters for a fantastic bout.