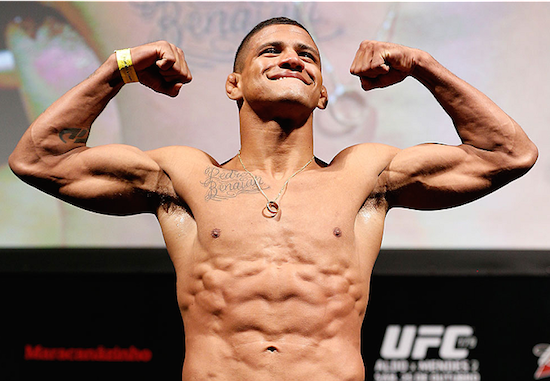 It looked as if the result of this fight would come down to which fighter possessed better footwork. The fight started off relatively even, but Gilbert Burns started to show signs of fatigue in the middle of the second and his movement suffered from it.

Alex Oliveira’s style forces his opponent to chase him around the octagon which explains why Burns’ gas tank was drained so early. Oliveira capitalized on this and attacked the body of Burns, further solidifying himself as the dominant fighter.

Out of nowhere, Gilbert Burns showed HE was the dominant fighter by going for the finish and locking up the win!

Burns came from behind tonight and knew he had to finish the fight in the third round if he wanted to walk out with his hands raised. Burns locked in an omoplata but Oliveira showed amazing submission defense and ultimatly escaped the hold. Burns was determined to get the “W”, however, and trapped Oliveira in an armbar. Burns cranked on the hold quickly and Oliveira was forced to tap out.

Gilbert Burns def. Alex Oliveira by way of Submission (Armbar) 4:14 of Round 3