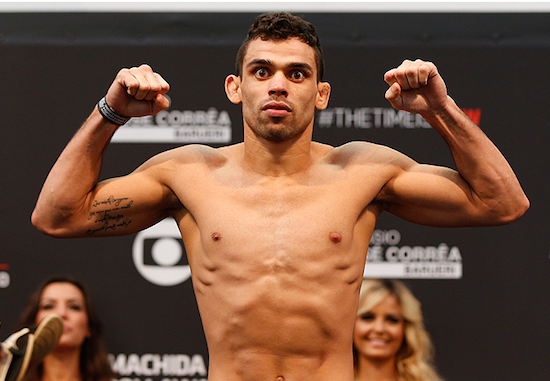 Number fourteen ranked Mitch Gagnon was no match for former champion Renan Barao tonight in the co main event of “UFC Fight Night 58”. There were a couple moments in the first two rounds where Barao looked like he was in trouble, but he escaped adversity quickly and found a way to finish the fight in the final round with less than two minutes remaining.

Gagnon thought he would be able to drag Barao down from the side, but Barao reversed and powered Gagnon down to the ground. Barao transitioned from side control to mount and easily locked in the head-arm choke. He completed the submission and there was no way for Gagnon to fight the hold off. He chose to tap out rather than pass out, and Barao finally picked up the win in the third round.

Renan Barao stated he wants another shot at the title after tonight’s victory.

Renan Barao def. Mitch Gagnon by way of Submission (Head-Arm Choke) 3:53 of Round 3