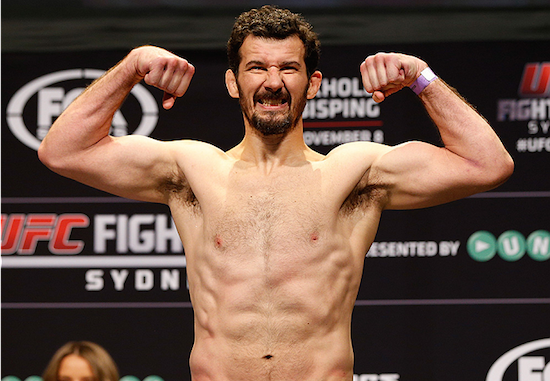 The UFC’s light heavyweight division was showcased in the Fight Night Sydney’s sixth fight. Anthony Perosh and Guto Inocente faced off in a fight that looked to keep the exciting night of fights going.

The two fighters met and exchanged strikes at the start of the fight. Inocente looked to land his dangerous counter strikes. Unfortunately the home town fighter, Perosh, had different plans.

Perish got the fight to the ground where he looked superior. It was only a matter of time before Sydney, Australia’s Anthony Perosh transitioned to the back mount, where he locked in the hooks, flattened Inocente out and got the rear-naked choke submission.

Perosh looked incredible in his submission victory and kept the finishes going!

Result: Anthony Perosh wins via submission (RNC) 3:46 of Round 1.