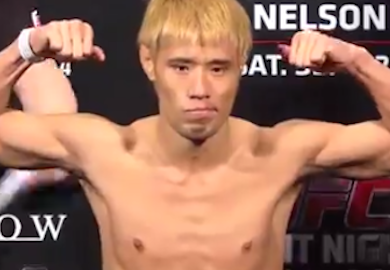 Masaniro Kanehara had trained months for tonight and it showed; he coasted to a decision win against replacement Alex Caceres. Caceres took this bout on one month’s notice after Urijah Faber was forced to pull out due to an injury. Caceres struggled the entire fight and even though he looked to be in decent physical shape, he could not execute a gameplan until the last round of the fight.

Kanehara was in full control for the first ten minutes of the fight and almost ended things early twice. After getting pinned against the fence in the clinch, Kanehara cracked Caceres with a right hook that wobbled him. Caceres defended well and lived to see round two where he almost walked right into a rear naked choke. Again, he showed great defense and fought the hold off to make it to round three.

Caceres fought the final five minutes like he knew he was down by two rounds, but he could not get off a powerful enough shot to knock Kanehara out. After time expired, it was no surprise when the judges announced Kanehara the victor.