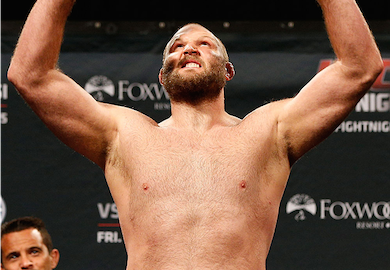 Ben Rothwell def. Alistair Overeem by way of TKO (Strikes) 2:19 of Round 1

Alistair Overeem’s infinite hype-train was once again derailed by an underdog. This time, “Big” Ben Rothwell clipped Alistair Overeem and picked up a huge first-round win.

Overeem had a nice pace and was doing a good job in the opening moments of the fight by picking Rothwell apart. Whenever he misjudged and missed a strike, he would go in for the clinch and separate quickly. Overeem also feigned a clinch by ducking his head down multiple times, and Rothwell caught on quickly and wobbled him once with an uppercut. Overeem recovered, however, and proceeded to pick his shots.

Overeem lunged forward with a left hook but Rothwell countered with a BIG right hand that landed over the ear of Overeem. Overeem slumped to the ground and Rothwell jumped on him, landing punch after punch. The referee stepped in and stopped the fight, causing another first round stoppage tonight.