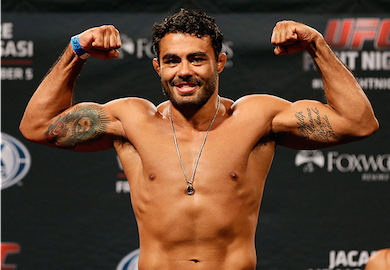 Chris Camozzi’s streak of bad luck continued as he suffered his fourth consecutive loss inside the octagon. Camozzi put on a better performance tonight than he has in his past fights, but Rafael Natal’s early technicality and superior strategy aided him in picking up the win tonight.

Camozzi landed some decent shots throughout the fight but he only followed them up with wild punches. As soon as Camozzi was experiencing some success, Natal would reset his stance and run to the middle of the octagon to sweep away any momentum Camozzi was gaining.

Natal found success with takedowns in the first round, but he telegraphed them throughout the remainder of the fight and that was his only downfall in the bout. He started to telegraph his offense and Camozzi shut it down easily, but he did not answer with any offense of his own.

The strategy was thrown out of the window by the third round as both men showed signs of exhaustion. Their punches became sloppy, their mouths were open, and their hands were hanging low.

When the final decision was read and Natal was announced the winner, the crowd voiced their disapproval with a chorus of boos. Who do you think won the bout? Share your thoughts in the comment section below!