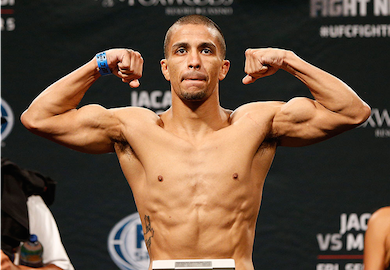 John Moraga def. Justin Scoggins by way of Submission (Guillotine) :47 of Round 2

Justin Scoggins found success in the first round with landing takedowns and transitioning at will. Upon landing the takedown, however, Moraga would latch on to Scoggins’ neck and threaten him with a guillotine. Scoggins defended by stepping to the side and claimed the first round due to his top-control time.

He would return to the center of the octagon with the same strategy in round two, but it would not pay off. Scoggins shot for a takedown at the start of the round but this time walked into a full-fledged guillotine. Moraga trapped him in the hold and torqued with all his might, forcing Scoggins to submit less than a minute into the round.