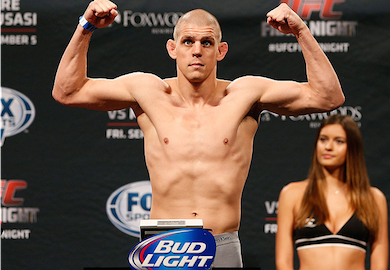 Joe Lauzon def. Michael Chiesa by way of TKO (Referee Stoppage) 2:14 of Round 2

Even though this fight did not make it to the end of the second round, this should easily earn “Fight of the Night” honors. This was Joe Lauzon’s seventeenth UFC fight and Michael Chiesa’s sixth.

Both fighters did a fantastic job at showing resiliency, refusing to walk into submissions and pushing through flurries of vicious strikes.

Lauzon caught Chiesa with a big knee to the forehead which opened a cut over the right eye of Chiesa. Lauzon followed up with a series of knees and punches, but Chiesa eventually escaped danger.

After separation, it was clear that Chiesa’s face was covered in blood and Herb Dean halted the fight so the doctor could examine the gash. As soon as the doctor saw it, he told Dean he should not continue and Dean waved it off. Chiesa tried to protest the decision to no avail.