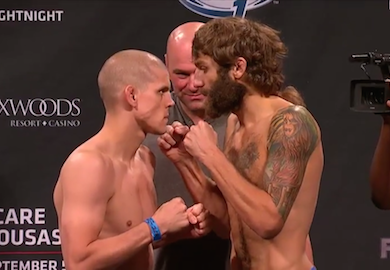 Fight of the Night: Joe Lauzon def. Michael Chiesa
Despite being stopped short due to unfortunate circumstances, this fight still brought the crowd to life for the main-card. Whether they were defending the takedown or working off their back fighting off a submission, there was not a dull moment in this fight. A knee from Lauzon would ultimately cause the end of the fight as it opened a cut over the right eye of Chiesa.

Performance of the Night: Ben Rothwell
“Big” Ben Rothwell walked into the octagon as a four-to-one underdog and walked out with his hands raised. Standing across the octagon was Alistair Overeem, a man who has rededicated himself to his training more times than you can count— but this time it seemed legit. Overeem walked in lean and in shape and picked his shots early on. Rothwell ate a punch to give a punch and it paid off, though. Rothwell clipped Overeem with a big right hand and Overeem wobbled to the mat. Rothwell followed him and blasted Overeem with punches until the referee stepped in.

Performance of the Night: Ronaldo Jacare Souza
Was this a big surprise? Jacare dominated Gegard Mousasi tonight and it was perfect payback for their bout in DREAM years ago. Mousasi seemed sluggish from the start and could not get any momentum going his way. Jacare took Mousasi down and transitioned at will but could not lock in a submission hold until the third round. Mousasi had escaped Jacare’s wrath after a scramble and his back was against the cage. Souza hopped on his neck and attempted a guillotine. Mousasi was trapped and had no other choice but to submit.