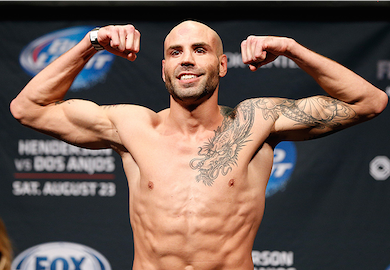 Ben Saunders made waves during his UFC return when he submitted Chris Heatherly with a modified omoplata!

Heatherly thought he wanted nothing to do with Saunders’ standup game so he shot for takedown. Heatherly landed the takedown, but it was Saunders who would capitalize for being on the ground. Saunders trapped Heatherly in a double-rubberguard then started to work for a triangle choke. Saunders’ triangle was loose and Heatherly was able to slip his head out, but he mistakenly left his arm behind.

Saunders sat up and worked for a rare, modified omoplata. He trapped Heatherly’s arm in an americana position with his legs and pushed down further with his own hands. Heatherly fought off submission for a few seconds, but the pain caught up and he had no choice but to tap out.

Ben Saunders def. Chris Heatherly by way of Submission (Omoplata) 2:18 of Round 1