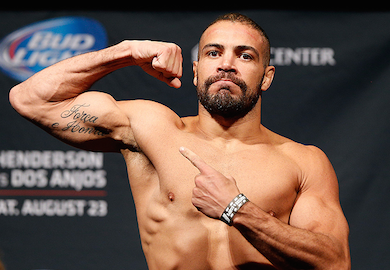 Thales Leites extended his winning streak to four with his brutal victory against Francis Carmont tonight.

Carmont has the Brock Lesnar/Cheick Kongo issue where he looks like one of the baddest men on the planet, but he always seems to be holding something back. Leites slowly picked Carmont apart with strike after strike until the second round where Leites clobbered Carmont with an overhand right. Leites dropped the groggy fighter with a brutal right uppercut and a left hook and Carmont crashed to the mat.

Leites started to punch Carmont who lost a bit of consciousness with each shot that landed. The referee stepped in quickly and put an end to the punishment.

Thales Leites def. Francis Carmont by way of KO (Strikes) :20 of Round 2